Local and Regional Flaps for Head and Neck Reconstruction

The reconstructive ladder is the paradigm that dictates the traditional progression from least to most complex intervention for a given clinical scenario. The usual sequence moves from delayed wound healing to primary closure, to skin graft, to adjacent tissue transfer, to regional flap, and finally to free flap.

The “reconstructive elevator” is the concept that there are clinical scenarios which may benefit from performing a more complex procedure, “skipping” lower rungs on the ladder. Increasingly sophisticated microsurgical techniques can potentially allow for enhanced function with less donor site morbidity. For example, a superior outcome may be achieved with a free anterolateral thigh flap rather than combining a hemi-gastrocnemius and hemi-soleus for a large proximal and mid-tibial defect.

What are the three basic modes of tissue movement of local flaps?

A rotation flap is a semicircular flap of skin and subcutaneous tissue that rotates about a pivot point into an immediately adjacent defect. A transposition flap is designed as a rectangle or square and crosses over areas of skin/subcutaneous tissue. In contrast, advancement flaps move directly forward without any rotation or lateral movement.

What is difference between random pattern, axial pattern, and perforator pedicle flaps?

A random pattern flap has no single dominant vascular supply, instead just random blood supply running through the various vascular plexuses (subepidermal, dermal, subdermal, subcutaneous, suprafascial, subfascial). Because of the limited blood supply, the length:width ratio is limited to 1–2:1.

An axial pattern flap contains a known vascular supply that is intentionally oriented longitudinally within a flap, thereby increasing the potential length:width ratio.

A perforator flap is based on one or more of the vessels that perforate either muscle or connective tissue in order to supply the skin and subcutaneous tissue used for the reconstruction. The axial vessel does not need to be sacrificed.

What are Langer’s lines? What are the relaxed skin tension lines? Are there any points at which they are in conflict?

Langer’s lines are defined by the direction that skin splits when pierced with a spike. It corresponds to the direction of collagen fibers in the dermis.

Relaxed skin tension lines (RSTL) run perpendicular to the direction of muscle contraction. It is thought that orienting incisions along RSTL results in improved cosmetic outcomes.

In most areas of the face, the Langer’s lines and RSTL are in harmony; however, they are in conflict at the nasal supratip, the lateral canthi, and the glabella.

Which anatomic landmarks of the head and neck do not tolerate asymmetry or distortion?

These landmarks do not tolerate distortion for a variety of reasons. In some instances, structures are paired, highlighting differences between the right and left side. In other cases, there are fixed proportions between two structures which cannot either exceed or be less than normal anthropometric proportions. For example, the nasolabial angle of the nasal tip rotation must be within a small range before abnormalities become obvious.

What is a Burow triangle?

Advancing a skin flap can result in excess bunching on either side of the flap’s base. This excess, which lies in the skin immediately adjacent to the flap’s base, results from a length discrepancy between the moving flap edge and the stationary adjacent skin. It can be excised as a triangle called a Burow triangle. A Burow triangle may also be excised along the outer edge of a rotational flap. Burow triangles often do not need to be excised in the scalp since they are often covered by hair and frequently become less prominent over time.

What is a bilobed flap? Describe the key points of its design.

1.  The primary flap should be the same size as the defect, and slightly longer because the flap will shorten as it is transposed.

2.  Position the secondary flap in an area of laxity. For the nose, this is usually a vertically oriented pennant placed at the sidewall or dorsum. A horizontal secondary flap closure will elevate the nasal tip.

3.  The secondary flap should be half the width of the primary flap. 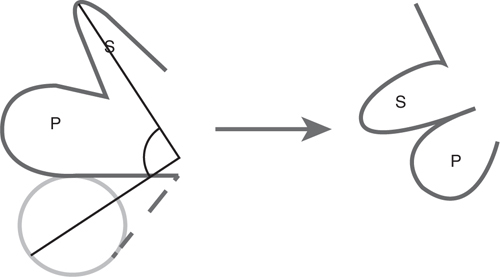 What is the maximum angle of transposition when using a bilobed flap?

According to the Zitelli modification, the maximum angle of transposition is 90 to 100 degrees (45–50 degrees per lobe). The original bilobed flap described by Esser was rotated a total of 180 degrees, but resulted in excessive tension on the skin closure.

What is a rhomboid flap? Describe the key points in its design.

The rhomboid flap is a transposition flap that fills a rhomboidal defect with a matching adjacent rhomboidal flap. Circular defects can be made rhomboidal by excising a small amount of additional tissue.

2.  The sides of the defect should be equal in length and parallel. Flap dimensions should be the same size and shape as the defect.

3.  Although four possible rhomboid flaps are available for any defect, the flap should be chosen based on location of laxity, scar direction, and vascularity. 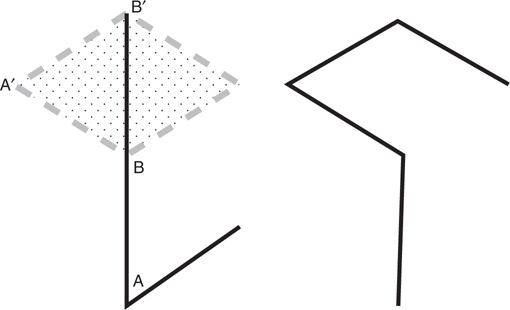 How can a large circular defect be closed with rhomboid flaps?

Conversion to a hexagon allows closure with three rhomboid flaps from the perimeter.

How does the Dufourmentel flap differ from the Limberg rhomboid flap?

The Dufourmentel flap uses a smaller degree of transposition and can thus be used for defects with angles up to 90 degrees. In Figure 55-3, C-F is oriented to bisect A-C-D, and E-F is parallel to D-B. 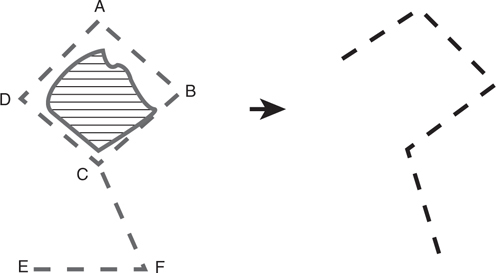 Describe the design of the V-Y advancement flap.

The V-Y advancement flap is designed with the open side of the “V” adjacent to the defect. Flap length is approximately 1.5 to 2 times the defect length. After the flap is advanced into the defect, the resultant donor area is closed as a line which appears as a “Y.”

In addition to filling defects, how else can a V-Y advancement flap be used?

A V-Y advancement flap can be used to lengthen structures such as the columella, and release tension in areas without a defect. The “V” incision is placed with the open side facing the direction of lengthening or excess tension. See Figure 55-4. 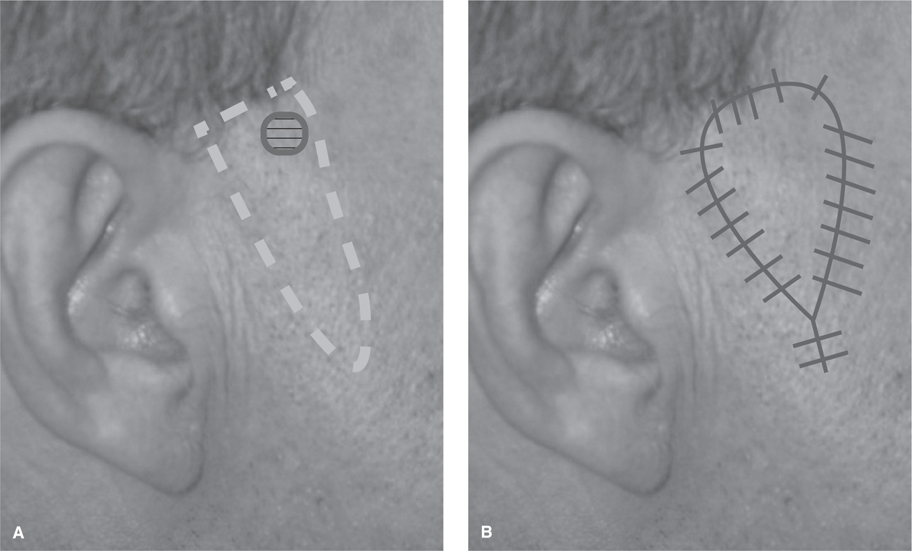 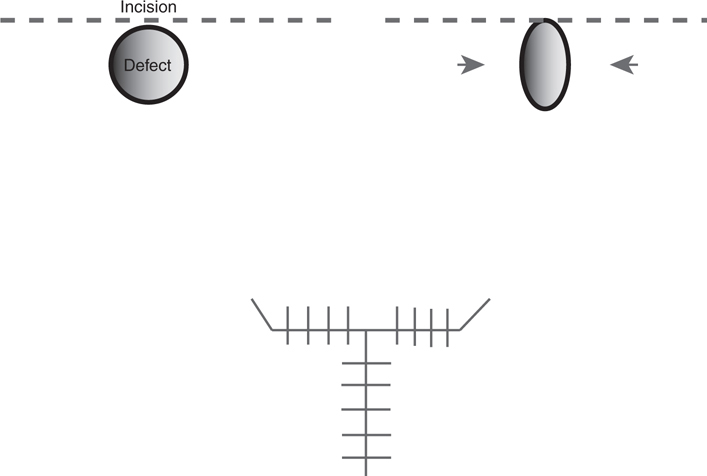 What is the total area that should be CPT-coded for a local rotational flap measuring 25 cm2 to cover a cheek defect measuring 4 cm in diameter?

What is the blood supply to the external nose?

What are the two general contour classes into which the nasal subunits fall? And what is the ideal reconstructive element for each class?

What are the three conceptual layers that must be considered when formulating a plan for nasal reconstruction?

How many aesthetic subunits compromise the external nose? How much of any given subunit must be lost in order to recommend removal of the entire subunit during reconstruction?

If >50% of any given subunit is missing, some recommend removal of the entire subunit leads to be a better aesthetic result. See Figure 55-6. 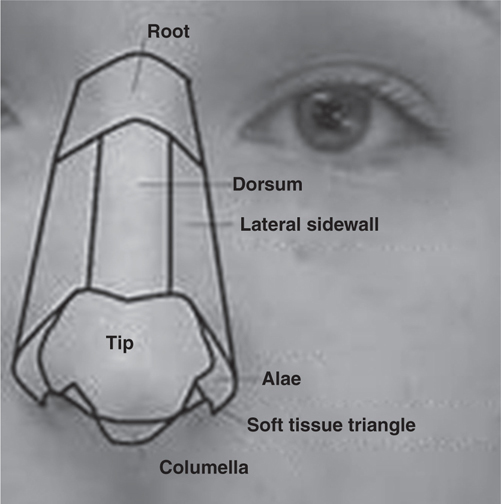 Figure 55-6  Aesthetic subunits of the nose.

Is healing by secondary intention an appropriate option for management of nasal defects?

Healing by secondary intention may be acceptable for smaller defects of the upper two-thirds of the nose, as well as neighboring areas, including the glabella and medial canthal region. It is generally unacceptable for defects of the lower nose, including the tip, ala, rim, and soft triangle, where contracture results in significant distortion and resultant skin quality is unsatisfactory.

What are potential donor sites for full-thickness skin grafting of nasal defects?

When may a superficial nasal defect be closed by a local flap?

Defects of less than 1.5 cm can generally be filled with local flaps from the relatively mobile and pliable skin of the nasal sidewall.

What are the indications for using a single-lobed flap such as a banner flap on the nose?

What are the indications for using a bilobed flap in nasal reconstruction?

What layer should undermining for a bilobed flap in the nose be performed?

Submuscular (superficial to the perichondrium and periosteum).

The nasolabial flap is designed with its medial edge in the nasolabial crease to hide the resultant scar in the crease. It can be superiorly or inferiorly based and can be performed in one stage (island flap) or two stages (pedicled flap requiring delayed division).

What is the blood supply of the nasolabial flap?

Perforators from the facial artery and angular artery supply the inferiorly and superiorly based nasolabial flaps, respectively. It is considered to be a random flap.

What are some indications for the superiorly and inferiorly based nasolabial flaps?

What are some problems with using the nasolabial flap for nasal alar reconstruction?

Potential mismatch between cheek and nasal skin color and texture. Loss of the concave border between the cheek and ala.

When can the cheek be used for nasal reconstruction?

Cheek advancement flaps can be used for nasal sidewall defects (~1.5 cm). However, doing so can lead to a loss of distinction between the cheek and nose (a “bowstring” appearance). These flaps should be divided at a later stage intentionally creating a scar at the junction between the aesthetic units.

What is the dominant vascular supply to the frontonasal advancement flap?

Otherwise known as a Rieger, dorsal nasal, or miter flap, the frontonasal advancement flap is supplied by the angular artery.

What are the indications for use of the frontonasal flap?

Transverse defects close to the midline in either the lower or middle third of the nose.

The glabellar flap is essentially a vertically oriented banner (unilobe) flap harvested from the midline of the glabella. Glabellar flaps are good solutions for reconstructing defects of the medial canthi.

The paramedian forehead flap is based on what vessel?

The supratrochlear artery, with contributions from the rich anastomotic arcade comprised of the infratrochlear, dorsal nasal, and angular arteries.

In which layers does the vascular pedicle to the paramedian forehead flap travel?

The supraorbital and supratrochlear arteries travel just superficial to the periosteum initially, then emerge just deep to the dermis near the hairline. Therefore, the distal tip of the flap can be raised with just skin and a small amount of subcutaneous tissue, whereas near the orbital rims the dissection has to be carried deep to the frontalis, just above the periosteum.

What are three ways to increase the length of a paramedian forehead flap?

2.  Extend the base of the flap up to 1.5 cm inferior to the superior orbital rim.

What is the approach for dealing with the situation where an adequately sized paramedian forehead flap will leave too large a forehead defect for primary donor-site closure?

Most paramedian forehead flap donor sites contract adequately with time and heal by secondary intention or can be easily camouflaged with a skin graft. Do not compromise the reconstruction of the recipient site for the sake of the donor site.

What are some options for nasal lining replacement?

1.  Redundant skin folded over from the coverage flap.

3.  Mucoperichondrial flap from the septum.

6.  Free flap from the radial forearm or anterolateral thigh.