Vascular anatomy of the rat hindlimb and cremaster muscle: The cremaster vascular pedicle is originating from the iliac vessels just proximal to the inguinal ligament 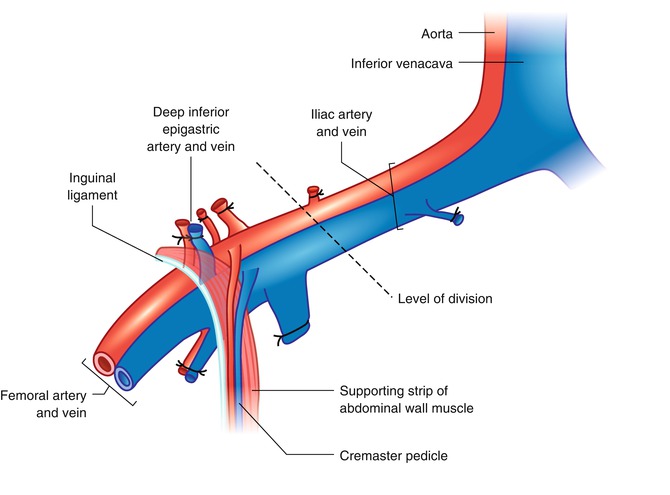 The cremaster muscle can be included within the hindlimb transplantation model as a flap if the limb is harvested at the level of iliac vessels proximal to the origin of cremaster pedicle. The best way to approach iliac vessels is to divide the abdominal muscles 5 mm above the inguinal ligament leaving the ligament partially intact with a strip of supporting abdominal muscles attached. By this way the cremaster vascular pedicle is not skeletonized and protected

Following iliac dissection the skin incision was extended on the ventral aspect of the scrotum. A traction suture placed to the inferior pole of the cremaster sac and then the fascial structures covering the muscle were carefully separated with blunt dissection. Through an anterior horizontal incision at the neck of the cremaster muscle tube the testicle and spermatic cord were pulled out and excised. The vascular pedicle of the empty cremaster tube flap was released from the pelvic floor with the supporting strip of muscle and a piece of inguinal ligament up to its origin from the iliac vessels. Next, a subcutaneous pouch is prepared in the antero-medial aspect of the ipsilateral hind-limb and the muscle tube was inserted in by pulling out the traction suture of the flap through a skin incision at the ankle (Fig. 21.3). Insertion of the muscle flap into this pouch provided both protects against drying during the transplantation procedure and storage in the transplanted limb until the day of observation. Iliac vessels were divided distally and the hind-limb was amputated at the level of one third proximal femur. The thigh musculature was near totally included in the amputated part. The arterial and venous stumps of the donor limb were irrigated with 1 cc heparin flush solution (100 U/mL).

The cremaster tube is kept in a skin pouch created in the middle aspect of the transplanted hindlimb and secured with a traction suture that is taken out at the ankle. This suture keeps the muscle stretched, which is essential for the subsequent preparation for intravital microscopy
Preparation of the Recipient Animal
Access to the femoral region was provided by a lower oblique inguinal incision. Femoral artery and vein were dissected and deep circumflex femoral vessels were divided. Following clamping of the vessels, hind-limb was amputated from one third distal part of the femur.
Transplantation Procedure
Following bone fixation by insertion of an intra-medullary rod (22 gauge needle) and cerclage wiring (0 steel) antero-medial muscle groups were sutured together by 5/0 absorbable sutures. Next, the femoral artery and vein of the recipient were anastomosed to the iliac artery and vein of the donor limb at the shortest possible stump length. 10/0 nylon and standard end-to-end technique was used. The size mismatch between the vessels was relieved by dilating only the femoral vessels. After adequate circulation had been established, the posterior muscle groups and skin were closed.
Preparation of Cremaster Muscle for Microcirculatory Observations
At the end of designated follow-up periods, animal re-anesthesized with pentobarbital and carotid artery was cannulated for arterial pressure monitoring. An intravenous catheter introduced into the external jugular vein for fluid and fluorescent tracer administration. The ventral part of the suture line in the groin was reopened. After having identified the dissection plane on the cremaster muscle, the flap was carefully dissected out from the subcutaneous pouch by extending the skin incision to the ankle. Animal placed supine on a custom-built plexiglass board and hind-limbs were secured around a hollow platform whose height was at the same level with the origin of cremaster pedicle from the iliac axis. The cremaster tube flap laid on a glass slide placed over this platform and opened from its ventral aspect with an ophtalmic thermal cautery. The flap stretched like a sheet over the glass slide by four to six 5/0 silk sutures after securing the upper pole of the cremaster to the anterior thigh muscles to prevent traction on the vascular pedicle. The muscle covered with a transparent polyethylene plastic sheet of low oxygen permeability (Saran Wrap). Throughout the procedure continual irrigation of the muscle with sterile Ringer solution was done. Temperature probes were placed to rectum and onto the surface of muscle for temperature monitoring and both temperatures were kept around 36 °C with the help of an adjustable heat lamp. A 15 min stabilization period was allowed before starting to microcirculatory observations.

Equipment for Microcirculatory Observations
Animal on the Plexiglass board transferred to the stage of a Zeiss 20 T epiflourescence microscope which was connected to a 19″ Sony Trinitron monitor through a Hitachi KP-C503 color video camera and a Panasonic AG-1730 video recorder. The muscle was transilluminated from below by a 12-V, 100-W, DC-stabilized light source. The final magnification on the screen was 1800×. Another video camera attached to a beam splitter connected the system to a custom-made optical doppler velocimeter from Texas A&M which was calibrated against a rotating glass disk coated with rat erythrocytes.
For permeability studies, the same microscope was connected to a Macintosh Quadra 950 computer through an intensified CCD video camera (Stanford Photonics, Stanford, CA) and a digitizer. The muscle was transilluminated by a flourescein light source with a selective filter system. The image was captured with Video 1,200 software in 8 bit gray scale and transferred to a custom-made image analysis program (Image 1.37) for evaluation.

With this equipment set-up it was possible to do the following microcirculatory measurements:

Red Blood Cell Velocities: RBC velocities were recorded in the main cremaster arteriole (A1) and venule (V1).
(b)

Vessel Diameters: Diameters of A1 and V1 and their second and third order branches were measured from the screen with a calibrated plastic ruler.
(c)

Capillary Perfusion: The number of perfused capillaries in 27 microscopic fields was counted. In order to make a systematic evaluation cremaster muscle was divided into nine equal zones and three random fields were selected from each zone. In each field, all perfused capillaries crossing an imaginary vertical and horizontal midline axis were taken into account.
(d)

Endothelium-Leukocyte Interactions: Three microscopic fields of post-capillary venules ranging between 25 and 30 μm in diameter were chosen randomly and a 2-min period was recorded onto video-tapes from each field. The following measurements were done off-line from the recorded video images [20]:

Rolling Leukocytes: The number of leukocytes that had slowed down in the microcirculation was counted.
(b)

Sticking Leukocytes: The number of adherent leukocytes that remained stationary on the vessel wall for more than 30 s were counted.
(c)

Transmigrating Leukocytes: The number of migrated leukocytes through the vessel wall into the perivenular tissue was counted.
III.
Only gold members can continue reading. Log In or Register to continue