Indications: Patients in whom there is little or no nostril show likely have excessive downward rotation of either the nose itself or the nasal tip (Figure 21-1). The amount of rotation is best described by the angle between the nose and upper lip. The normal value for the nasolabial angle in females is approximately 100 degrees to 105 degrees and in males it is approximately 95 degrees to 100 degrees. Patients in whom this angle is too acute may be candidates for techniques that rotate the tip upwards. The position of the nose is determined by the elements that stabilize the nasal tip. These include the skin over the lower lateral cartilages, the position of the lower lateral cartilages themselves, the fibrous attachments between the lower and upper lateral cartilages, and those between the lower lateral cartilages and the caudal septum. Lateral crura that are positioned more obliquely within the nasal tip and alar margin contribute to decreased tip rotation. Hyperactivity of the depressor septi nasi muscle can also be an important factor contributing to decreased rotation of the nasal tip, especially during smiling. An “overactive” depressor septi muscle that contributes to drooping of the nasal tip is diagnosed by the “smile test” (ie, the nasal tip drops slightly when the patient smiles). Division of this muscle has been described as a treatment for the patient with a positive smile test.1 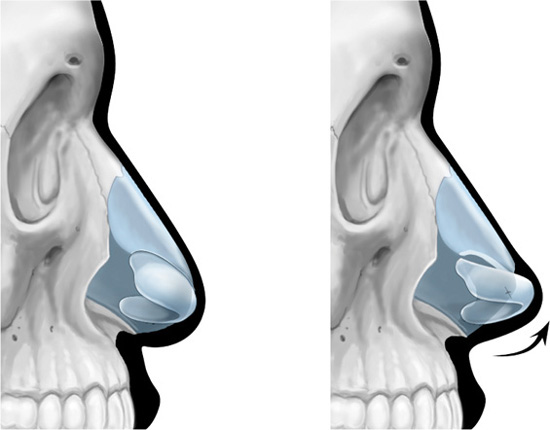 Markings: No specific markings need to be made pre-operatively. A well-thought-out plan for surgery should be created. The estimated degree of change in the nasolabial angle is helpful in predicting the maneuvers that will be required to effect this change.

Approach: The major contributors to the nasocolumellar angle are the caudal end of the septum and the anterior nasal spine of the maxilla. Rarely are the middle crura of the lower lateral cartilage a significant factor. Both of these structures can be approached through either a closed or an open approach. With an open approach, the skin is undermined to free the lower lateral cartilages of restrictive forces. The individual lower lateral cartilage complexes can be separated by dissecting through the loose soft tissue between them to allow visualization of the caudal septum. The anterior spine is found by dissecting inferiorly to the maxillary bone. With a closed approach, a hemi- or complete transection incision allows similar exposure of these structures.

Technique: Small increases in tip rotation may be achieved by simple excision of the cephalic border of the lower lateral cartilages (Figure 21-2