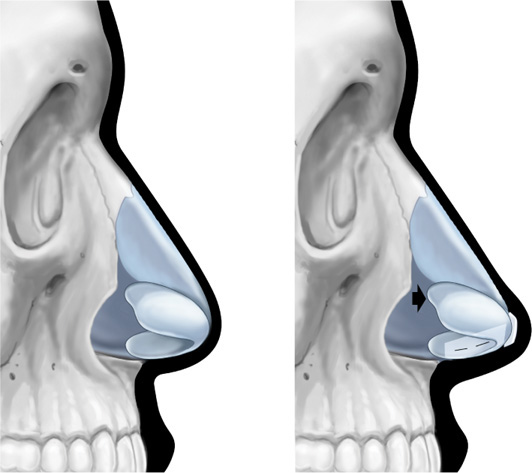 Markings: No specific skin markings need to be made preoperatively. However, a well-thought-out plan for surgery should be created including a tiered approach to achieve the desired result.

Approach: The nasal tip may be approached via an endonasal or open nasal approach.

With the open nasal approach, a standard incision is made across the columella, extended up either side, and continued caudal to the inferior margins of the lower lateral cartilages. The nasal tip is dissected out as previously described.

Techniques: A graduated method of achieving increased tip projection is recommended and progresses from sutures to struts and grafts.1,2

Tip sutures: The simplest means of increasing tip projection is removal of any intervening interdomal tissue and suturing the middle crura to one another with medial crural sutures. Further projection can be achieved with interdomal or intradomal sutures. The lower lateral cartilage complex can also be elevated and sutured to either the septum or an anterior septal extension graft.