Indications: Patients with increased projection of the nasal tip may be candidates for a number of specific interventions to decrease tip projection and improve facial balance (Figure 20-1). This is often not easy to achieve and a careful preoperative determination of the patient’s problem should be made. Specific factors that may contribute to the increased projection include the length of either the medial or lateral crura of the lower lateral cartilages, distance from the footplates of the medial crura to the anterior nasal spine, connections between the medial crura and the caudal septum, and connections between the lateral crura and the caudal border of the upper lateral cartilages. 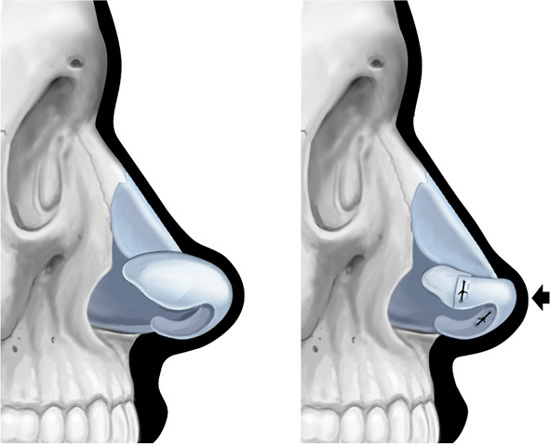 Markings: No specific markings need to be made pre-operatively. However, a well-thought-out plan for surgery should be created.

Approach: Maneuvers to decrease projection of the tip are best addressed with an open approach. Via an endonasal approach, the hemi- or full transfixion incision will disrupt the connections between the medial crura and the caudal septum. Continuing the mucosal incision laterally as an intercartilaginous incision will further disjoin the lateral crura from the caudal margin of the upper lateral cartilages. For the open approach, a standard incision is made across the waist of the columellar skin and extended into bilateral rim incisions for optimal exposure of the components of the nasal tip.