1.  Flap: Segment of tissue that is transferred with its own blood supply (in contrast to graft, which is revascularized from recipient bed).

2.  Pedicle: Base of flap that contains blood supply.

a.  Random pattern flap: Raised without regard to any named blood supply, relying on blood flow through subdermal plexus (Fig. 4-1).

a.  Local flap: Shares side with the defect

b.  Regional flap: In same region of the body as the defect, but does not share defect margin.

c.  Distant flap: Not in the region of the defect, located in a different part of the body 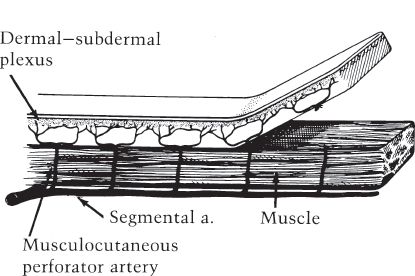 1.  Definition: Composite unit of skin and deeper structures between skin and bone supplied by a source vessel.

4.  Neighboring angiosomes can be linked by true arterial anastomoses or by choke vessels (reduced caliber anastomoses) that dilate under certain circumstances, such as flap delay (see below).

5.  Connections between angiosomes explain how flaps can support more than one angiosome area under certain conditions.

1.  Restore form and function to the defect

1.  Systematic approach to facilitate decision-making for reconstruction of defects.

2.  Least complicated technique chosen to address needs of the defect and reconstructive goals.

a.  Healing by secondary intention 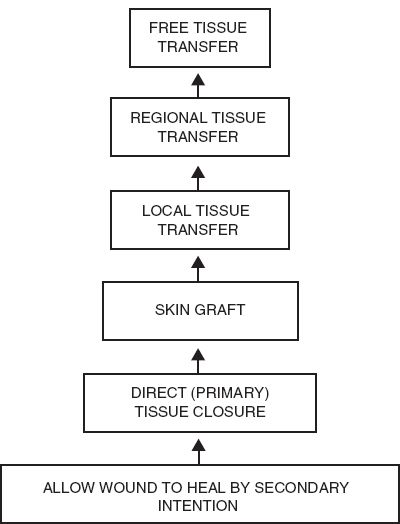 1.  Often best solution is not simplest

2.  Option is chosen that will give patient best aesthetic and functional result, often requiring a “jump” in the ladder (e.g., free flap may be the best first choice if superior result is unmatched by other options, even if simpler option can also be used).

3.  In reality, this is the method in which flap selection is typically done.

3.  Location of the defect

1.  Reconstruction of the local defect with similar, adjacent tissue

B.  Blood supply: Dependent on blood supply from fascial plexus (unless random pattern)

a.  Designed on random vascular supply from subdermal plexus

d.  Most (but not all) small local cutaneous flaps based on random blood supply

1.  Advancement flaps: Moved by sliding or stretching flap toward the defect in one direction, requires skin laxity

a.  Single-pedicle advancement flap (Fig. 4-3A)

i.  Raised as square or rectangle

iii.  Bürow’s triangles made at base to facilitate advancement and closure (helps correct length discrepancy between skin surrounding wound and skin of flap margin)

i.  Incision parallel to the defect 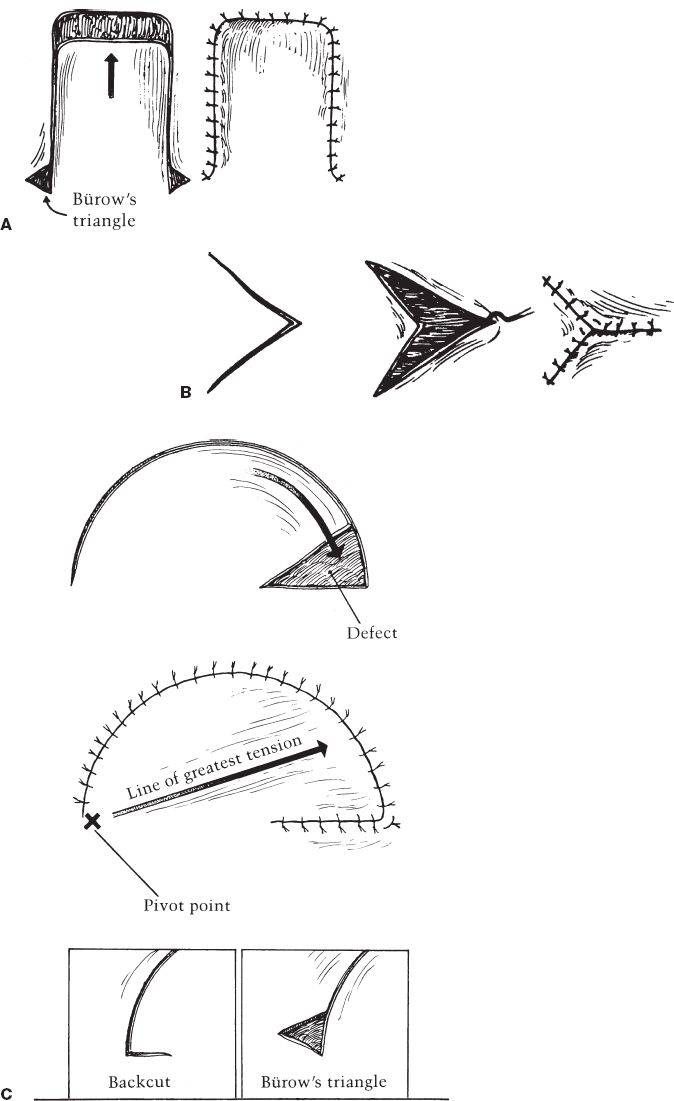 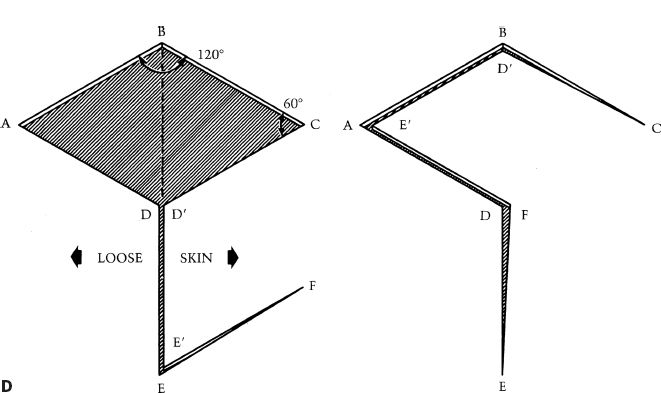 i.  Pedicle of island flap not connected with surrounding skin, supplied only by connection with subcutaneous tissue (or artery/vein)

ii.  Transferred by advancement or pivot (see below)

iii.  Geometry of cutaneous portion depends on the defect

ii.  Flap raised in V shape and advanced to fill the defect

iii.  Closed in Y to close the donor defect

iv.  Flap may be modified to a Y–V variation

v.  Useful on face and fingertips to fill defects (island design) or can be used to release contracture (advancement design)

2.  Pivotal flaps: Moves around fixed point at base of pedicle

i.  Flap raised in semicircle immediately adjacent to the defect.

ii.  Height of the defect = ½ to 1 times radius of flap curvature

iii.  Standing cutaneous deformity may occur at base (depending on shape of the defect), requiring removal.

iv.  Back cut at base of flap shifts pivot point to reduce tension of closure

vi.  Flap design with length of incision ˜4 times width of the defect typically does not require Bürow’s triangle to equalize length.

ix.  Flap should be inferiorly based on face to facilitate lymphatic and venous drainage.

x.  Useful for scalp defects and sacral pressure sores (among other defects)

a)  Defect made into rhombic shape (equilateral parallelogram) with 60 and 120 degree angles.

b)  First side of flap is a short diagonal of rhombus extended at an equal length.

c)  Second side of flap is a line parallel to and same length as nearest limb of flap.

d)  Four flaps can be designed around sides of the defect, flap design chosen with best skin mobility and scar placement.

a)  Variation of rhomboid flap

b)  Used for rhomboid-like defects with angles other than classic 60 and 120 degrees.

d)  Second side of flap is parallel to long diagonal of the defect same length as the defect.

a)  Transposition of two flaps with common base

d)  Useful for nasal defects where site of the defect (nasal tip) does not have laxity for primary closure, but donor site of second flap (nasal dorsum) has sufficient laxity for closure.

a)  Transposition of two adjacent and opposing triangular flaps

c)  Moves lateral tissue inward from both directions in order to increase tissue length longitudinally (Table 4-1) at the expense of width.

d)  Classic design: Central segment with limbs oriented at 60 degrees (although can be 30 to 90 degrees); three lines are equal in length; central segment oriented along the direction of the desired lengthening (e.g., in the same direction as scar to be released). 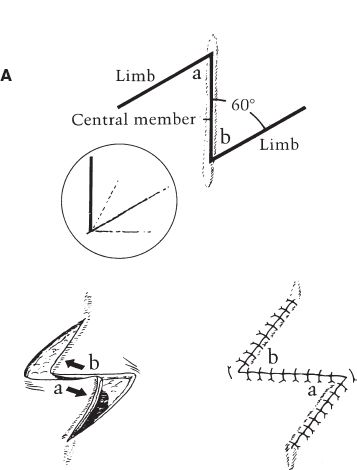 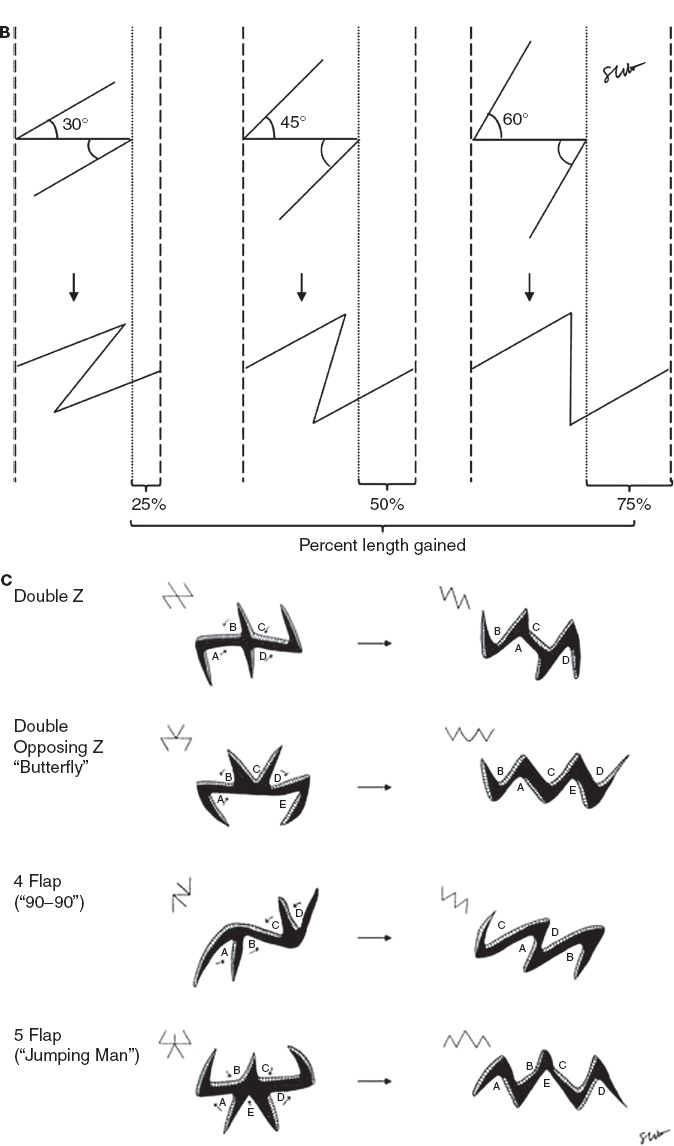 Figure 4-4. A: The standard Z-plasty. B: Percent length gained with the Z-plasty. C: Multiple Z-plasties.

e)  Increasing angle of limbs increases percent gain in length along the central limb (Fig. 4-3B).

f)  Multiple Z-plasties can be designed in series (Fig. 4-4C)

a)  Skin paddle transposed into the nearby defect over or under a skin bridge.

b)  Base of flap is not contiguous with the defect in initial procedure.

c)  Flap is divided from base in secondary procedure and inset fully into the defect.

a)  Single-stage version of interpolation flap

b)  Transferred by pivoting or advancement (see above)

2)  Tangent is drawn from any side of the circular defect 1.5 times length of diameter of the defect (parallel to relaxed skin tension lines)

3)  Second side of flap same length as defect, drawn at 50 or 60 degree angle to first incision

4)  Distal tip of flap is trimmed

a.  Flap elevated in subcutaneous plane

b.  Pedicle base is on one border of the defect

c.  Flap is turned over into the defect like a book

d.  Flap elevated with or without skin

1.  Need for thin, pliable coverage when bulk of muscle flap not desired. 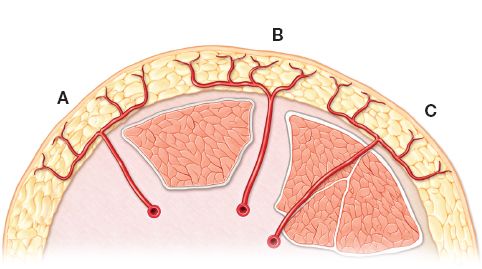 2.  Type A and B pedicles are relatively constant in location; Type C pedicles have more variability in location

3.  Pedicle can be lengthened by tracing perforators back to source vessel.

4.  Fascia-only flaps advantageous because donor site can be closed primarily; fasciocutaneous flaps may or may not require skin graft to close donor site.

A.  Muscle can be transferred alone (muscle flap) or with overlying skin (musculocutaneous flap)

1.  Muscle flaps are useful when a bulkier reconstruction is needed.

3.  Need for tissue with robust blood supply due to risk of infection or poor perfusion.

1.  Skin island is designed to include skin perforators arising from the source artery.

2.  Musculocutaneous perforators typically located near entry of dominant pedicle into hilum of the muscle. 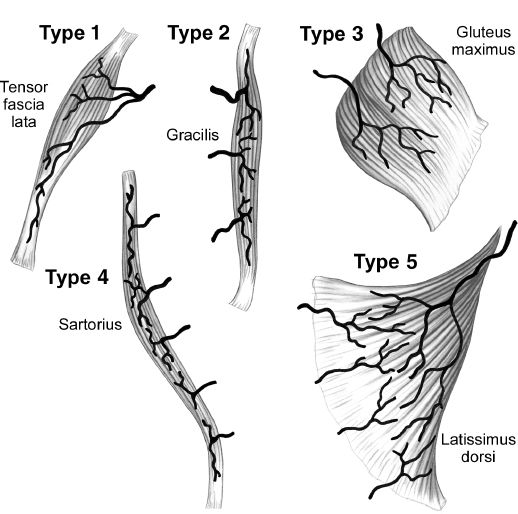 4.  May also include bone, motor nerve, or sensory nerve in transfer (depending on donor muscle).

5.  Functional muscle is sacrificed, thus donor morbidity must be considered when selecting flap.

2.  Flap is partially elevated and entirely elevated, or selected pedicles are divided into one or more procedures; flap is brought back to in situ position in staged procedure before definitive flap elevation and transfer.

4.  Time between delay and definitive procedure is usually 2 weeks.

6.  Physiology of improved perfusion with delay

b.  *Dilation of previously closed choke vessels increases the area of tissue supplied by the dominant pedicle.

2.  Flap is raised and transferred to recipient bed. 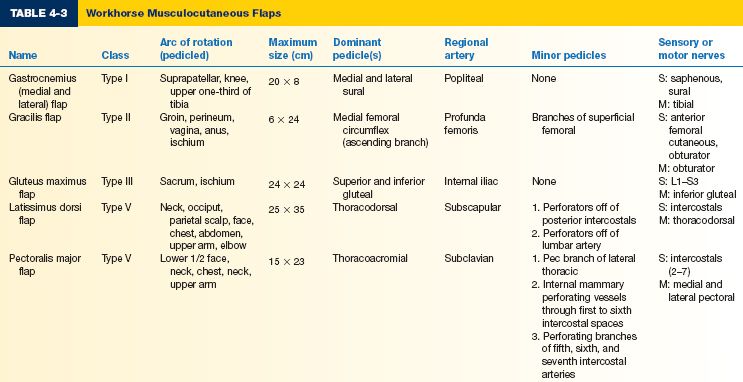 3.  After 10 to 21 days, new blood vessels have grown in the recipient bed which will support a skin graft. In the next stage, the top layer (superficial one-half to three-fourths) is raised and returned to original donor site.

4.  Viable subcutaneous tissue is left behind and can be covered with skin graft.

2.  Indication: When desired donor tissue has required qualities but does not have reliable axial blood supply.

a.  Stage 1: Transfer of a new vascular pedicle into an area of tissue that will be used to reconstruct defect (pedicle wrapped in Gore-Tex or silicone sheet to prevent scarring around pedicle).

b.  Stage 2: The flap, based on new vasculature, can be raised after approximately 6 to 8 weeks (transferred as pedicle flap or free tissue transfer).

4.  Rarely used because of the availability of many alternative flap options.

5.  Can be performed with tissue expansion; introduced pedicle is placed beneath donor tissue and above tissue expander; Doppler flow is monitored during expansion.

7.  Venous congestion is a common complication (may be lessened with flap delay).

1.  Introduction of additional tissue layers into flap prior to transfer to create multilayer composite flap; allows tissue to have time to mature before transfer.

b.  Stage 2: Raise flap en bloc as composite flap and transfer to recipient site after approximately 2 to 4 weeks (shorter maturation time than prefabrication because vascular supply is not altered).

1.  Enhancing blood supply of a pedicled flap by performing microvascular anastomosis to a secondary pedicle of the flap.

2.  Tissues supplied by single source artery can be transferred together.

3.  Useful when reconstruction of multiple tissue components is needed.

a.  Motor nerve and/or sensory nerves are preserved or coapted to appropriate nerve near the recipient site.

i.  Gracilis with obturator nerve

I.  Chimeric versus conjoined (Siamese) flap

1.  Chimeric flap: Has multiple territories, each with independent vascular supply (perforators or named branches), but territories are NOT connected except by connection to common source vessel.

a.  Temperature: Should be body temperature

b.  Color: Should be pink

d.  Bleeding: Upon introduction of fine-gauge needle, bright-red bleeding should be present

e.  Firmness: Should be soft, with some appreciable turgor

a.  Doppler (implanted or external)

b.  Blue to purple color

f.  If congested, unwrap, release sutures and consider leech therapy (patient must be on quinolone or third generation cephalosporin against Aeromonas)

3.  Patient position or motion that puts pressure on flap

5.  Kinking of flap, pedicle, or both (may be influenced by flap design, pedicle length, interpositional vein graft length)

1.  What is the most common (Mathes and Nahai) type of muscle flap in the body?

2.  What is the physiology behind improved perfusion after flap delay?

3.  What is the theoretical gain in length along the central limb of a Z-plasty with 60 degree angle?

4.  What is the pedicle to your flap?

5.  What is difference bertween a type II and type V flap?

1.   Z-plasty before and after