3.3 Analysis of Patients with Nasal Deformity

“The qualities of measure and proportion invariably constitute beauty and excellence.” Plato (427–347 BC)

Beauty is a characteristic with an elusive definition, but its presence is generally unmistakable. When used to describe the human form, it can be thought of as the aggregate of facial or body features that produces a strong sense of pleasure in the beholder. It is a motivator for a great number of human behaviors, including social, reproductive, architectural, and artistic endeavors. Among the earliest historic records are the Gravettian Venuses (Fig. 3.1a–c), Paleolithic stone carvings believed to represent the standard of human beauty at the time of their creation. Art from successive civilizations indicates a continual desire to portray beauty, and also illustrates a dynamic aspect to our perception of it (Figs. 3.2 and 3.3). Over nearly 30,000 years, the human form depicted in art serves as a historical record for the changing standards of beauty. 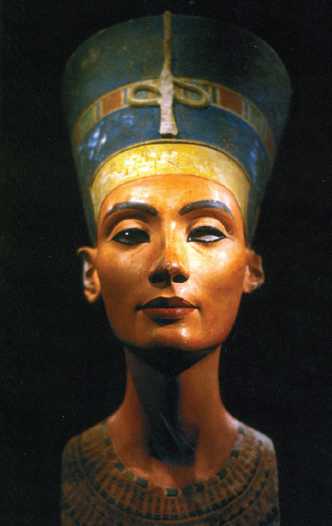 The observation that beauty ideals are dynamic illustrates a fundamental anthropologic principle: features deemed attractive change with time, but the social, reproductive, and evolutionary advantages they convey do not. With plastic surgery, the human form has become a medium with which to create or enhance beauty, enabling the procurement of these advantages beauty conveys. Of the plastic surgical repertoire, rhinoplasty has assumed a prominent role. This chapter will examine facial proportions, aesthetic ideals, and analysis of nasal deformity in the contemporary era of rhinoplasty.

The initial awareness of beauty as a quality to be appreciated, enhanced, or created cannot be located within the historical record. Self-ornamentation with jewelry has been dated to the genus Homo neanderthalensis in the Upper Pleistocene Epoch (c. 32,000 BC), even before the Gravettian Venuses, but it remains unknown whether this adornment was for personal embellishment, superstitious protection, or both.1 It is an important distinction, as the former implies concern for appearance and acknowledgment that beauty can be enhanced. While possible that our early forebears had developed such awareness, it is documented with certainty that the academic study of beauty and the first principles of facial analysis arose millennia later in Ancient Greece. The word aesthetic derives from Greek aisthesis: “to have a sense of or devotion to beauty.” Greek philosophers felt that beauty was an essential part of the ideal universe and attempted to define it with the same mathematical principles and geometric relations that were thought to define the laws of nature.2 Chief among them were Plato and his student Aristotle, whose pursuits concentrated largely on harmony, beauty, and mathematic proportions. Their teachings were manifest in the work of Greek sculptors including Phidias, Polykleitos, and Praxiteles, whose own works embodied the beauty ideal that subsequently influenced the perceptions of subsequent generations.3 Congress of Anthropology in Frankfurt, Germany. It defines the patient position in which all-facial analysis and photography should occur. Since the landmarks defining the Frankfurt plane are bony landmarks that would technically require radiographic determination, corresponding surface anatomy is used. The tragion marks the supratragal notch and approximates the superior aspect of the porus acusticus. The point of transition between the skin of the inferior eyelid and the skin of the superior cheek approximates the infraorbital rim. Recognized topographical facial landmarks are illustrated in Fig. 3.5. 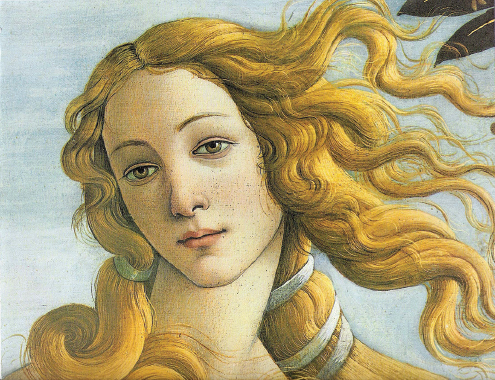 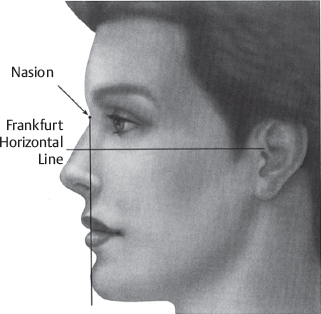 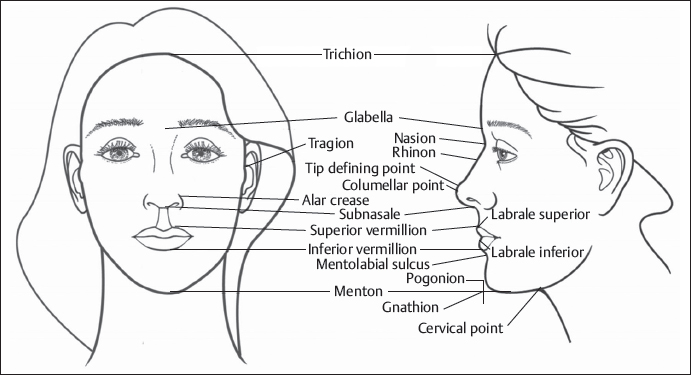 Despite much endeavor, there is no universal algorithm for beauty. It is a spectral characteristic, achieved to varying degrees when an individual’s features combine to produce a visually pleasing result. A set of geometric conditions has been described which, when satisfied, tend to yield an attractive visage. These conditions are the rules of facial proportion. The universal standard of reference for these rules is defined by a plane oriented parallel to the floor connecting the superior aspect of the external auditory canal to the infraorbital rim. This horizontal reference is the Frankfurt plane (Fig. 3.4), so designated at the 1884 World Congress of Anthropology in Frankfurt, Germany. It defines the patient position in which all-facial analysis and photography should occur. Since the landmarks defining the Frankfurt plane are bony landmarks that would technically require radiographic determination, corresponding surface anatomy is used. The tragion marks the supratragal notch and approximates the superior aspect of the porus acusticus. The point of transition between the skin of the inferior eyelid and the skin of the superior cheek approximates the infraorbital rim. Recognized topographical facial landmarks are illustrated in Fig. 3.5.

The face is a complex set of surfaces with tremendous variability. One goal of facial analysis is to provide a straightforward framework to compare preoperative and postoperative results. The facial angles describe such a framework and are especially important in evaluation of the rhinoplasty patient. The lines connecting the nasion to the glabella and the nasion to the tip-defining point form the nasofrontal angle (NFR). Ideally, this angle is 115 to 130 degrees (Fig. 3.7). The facial plane (FP) is a two-dimensional section including the glabella and the pogonion. The nasofacial angle (NFA) is formed by the angle between the FP and the line tangent to the nasal dorsum (Fig. 3.8). The ideal NFA is 36 to 38 degrees. The nasomental angle is formed by the same nasal dorsum tangent and the line connecting the tip-defining point to the pogonion (Fig. 3.9). Its aesthetic range is 120 to 132 degrees. The nasolabial angle (NLA) is defined by the line from the subnasale to the superior vermillion border and the columellar tangent from the subnasale (Fig. 3.10). It generally is thought to lie between 90 and 100 degrees in males and 100 and 110 degrees in females.7–9 More recently, the columellar facial angle (CFA) has been proposed as a better metric to quantitate tip rotation because of its independence from the maxilla and upper lip position.10 The CFA is the angle between the line connecting the anterior columella to the subnasale and a perpendicular dropped from the Frankfurt horizontal. Its typical value is slightly greater than the typical NLA, but it still falls generally within the same aesthetic range.11,12 The FP and the line connecting the cervical point to the menton define the mentocervical angle. It ideally lies between 80 and 95 degrees (Fig. 3.11). 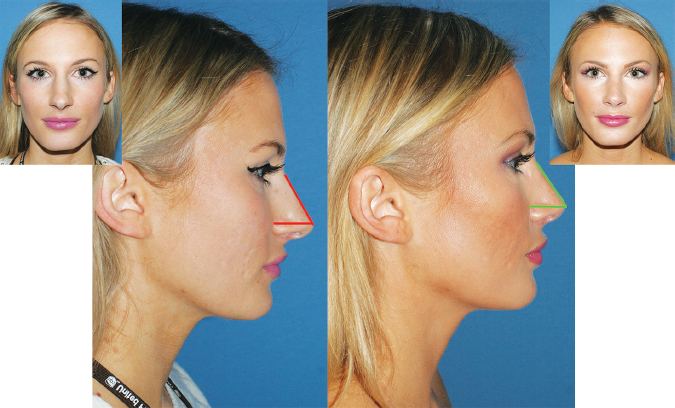 Fig. 3.6 Nasal analysis before and after rhinoplasty. If the nasal length (nasion to tip) is φ times nasal projection,22 the nasofacial angle falls within the aesthetic ideal 36 to 38 degrees. 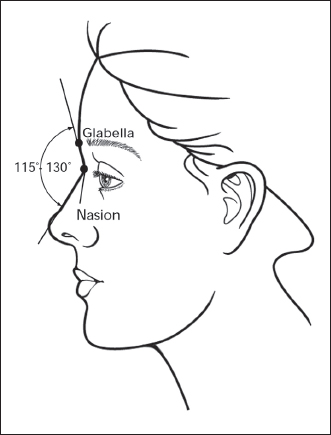 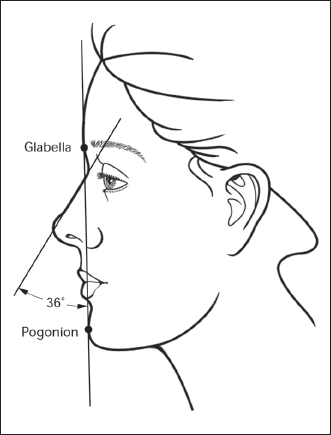 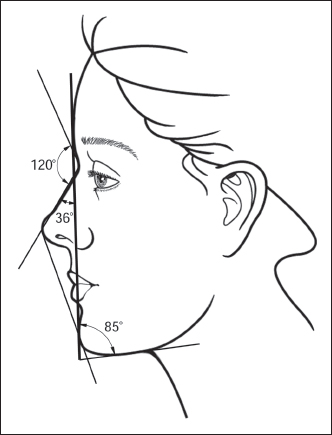 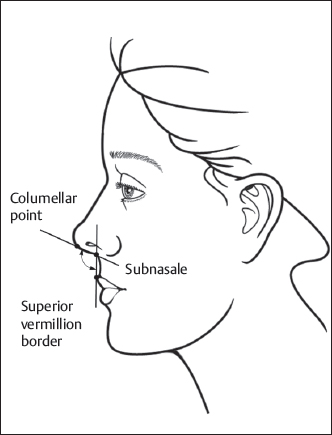 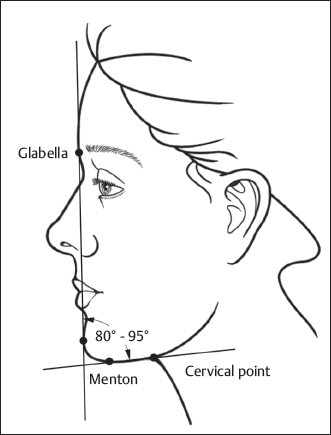 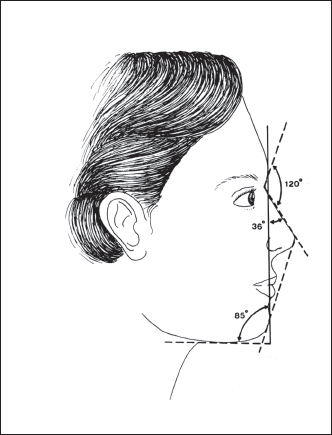 Use of the five facial angles collectively was outlined by Powell and Humphries and it is known as the Aesthetic Triangle.13 Incorporation of the individual facial geometric relations into this single construct allows for simultaneous evaluation of facial proportions and emphasizes the interdependence of the facial elements (Fig. 3.12).

The Ancient Greeks taught that the ideal human head is one-eighth the height of the body and twice the length of the neck, as measured from the sternal notch to the chin and from the chin to the vertex.14 The face can be divided into equal horizontal thirds and vertical fifths (Fig. 3.13) on frontal inspection. The superior third is the forehead from the trichion to the glabella. The middle third, or midface, extends from the glabella to the subnasale, and the inferior third, or lower face, is the region from the subnasale to the menton. These divisions are less applicable if the trichion is high, as in male pattern baldness, or unusually low. In such instances, division of the lower two-thirds of the face liberates facial analysis from the inconsistencies of the hairline (Fig. 3.14). The superior landmark becomes the nasion, the middle point the subnasale, and the lowest the menton. Using this method, the upper division (n-sn) is ideally three-fourths the height of the lower division (sn-me).

Division of the face into its constituent anatomical features yields the aesthetic units. The forehead is the prominent region of the face located superior to the brows and inferior to the hairline. It ideally comprises the upper third of the face and has a gentle sloping convexity. The glabella is the most anterior point of the forehead and is located at the nose–forehead transition, just superior to where the paired nasal bones about the frontal bone. As with nearly all facial units, the forehead and nose maintain an aesthetic interdependence. Differing contours of the forehead influence nasal appearance by either accentuating the nasal profile, as in the case of a retrusive forehead, or diminishing it with a protrusive forehead.

Part of the frontal bone, the brow is the supraorbital bony prominence that separates the upper and middle thirds of the face and serves as the face’s prime horizontal buttress. Just anterior to the frontal sinuses, the brow serves to protect the orbits and cranial vault from the forces of blunt trauma. It is accentuated by the presence of eyebrows, two paramedian strips of hair-bearing skin. The eyebrows ideally begin 1 cm above the medial canthus, directly superior to the lateral aspect of the ala nasi. In females, the eyebrows should have an arched shape peaking above the supraorbital rim at the level of the lateral limbus. Males should have less of an arched shape with the eyebrows located at the level of the supraorbital rim. The eyebrow terminus should occur laterally at an oblique line that passes from the lateral aspect of the ala nasi through the lateral canthus.

With variegated color and size, the eyes are perhaps the most individualized part of the human face. They are frequently described as the seat of human expression; however, the intrinsic muscles of the pupil and iris are under involuntary autonomic control, incapable of commanding outward affect. A survey of facial expressions quickly reveals that the muscles surrounding the eyes, in fact, convey emotion. Aging is also conveyed by the appearance of the skin and soft tissues surrounding the eyes. Blepharochalasis and blepharoptosis project a worn look, often incongruous with the actual state of the patient’s physical or mental health. 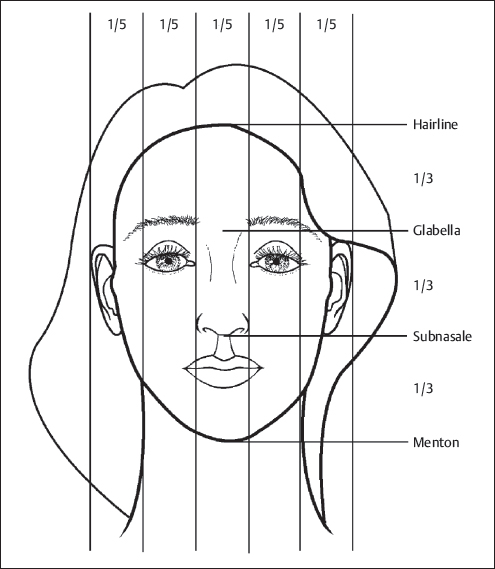