The cartilaginous septum is the central structural element of the nose and has much the same function as a tent pole. It provides suspension for the upper lateral cartilages and anchors the anterior nose to the facial skeleton. Certainly, most of the nasal deformities are associated with septal problems due to the septum’s key role in the nasal framework.

Functionally, the nasal septum is part of the aerodynamic system of the nose that, inter alia, facilitates mass and heat transfer. Therefore, septum deformities can affect not only the nasal resistance, but also the inner milieu and the condition of the mucous membranes.1,2 Due to the septum, two parallel airstreams pass through the nose during respiration. They interact according to the laws of fluid dynamics. The result is a functional interrelation between both nasal cavities, which, in a way, is determined by the septum’s anatomy. In other words, the septum subdivides the nose into two functionally corresponding units that is, e.g., also reflected in the occurrence of the nasal cycle.1

The evolution of septoplasty in a brief retrospect synopsis might illustrate the basic issue of this operation. In the early 1900s, Killian and Freer developed the concept of the submucous septal resection.3 Unlike their predecessors, they stressed the need to preserve the mucosal layers and took into account the supportive function of the septal cartilage, feeling it was essential—but also enough—to preserve a dorsal and caudal cartilage strut for support. This is a relatively straightforward procedure that can achieve reasonably good short-term results in many patients. As such, it was still being used by many surgeons in the 1980s, even though Cottle, Fomon, and Metzenbaum had already laid the foundation for modern septoplasty several decades earlier.4 This modern approach is based on the principle of preserving or reconstructing cartilaginous and bony structures as much as possible. Typical long-term complications such as saddle nose deformity or septal perforations are considerably less common when this principle is followed. Currently, the development is driven by increased functional and aesthetic demands. Consequently, the so-called extracorporeal septum correction became more common.5–7 It is a versatile, precise, and reliable method, but needs experience and advanced surgical skills.

Rather than exploring all aspects of septal operations in detail, this chapter deals more with underlying principles that will help the surgeon to view the nasal septum within the context of complex rhinosurgery and take into account the long-term effects of specific procedures. Viewed in this manner, procedures on the nasal septum should actually not be considered as operations for beginners.

A successful concept of functional–aesthetic rhinosurgery requires studied consideration of the nasal septum. The septum has special significance because it is involved in almost every rhinological problem to some degree.

There are two basic goals of septal surgery that are intrinsically tied to each other.

The first is to promote optimum nasal airflow distribution, which does not necessarily mean to create an overall straight septum, but to aim for an approximate symmetric flow domain in both sides of the nasal cavity. This is of particular importance at the isthmus nasi, which has to be considered as the bulk flow formation structure.8 By that, it creates up to 80% of the entire inspiratory nasal resistance.9 Consequently, the isthmus area requires the most attention in diagnosis and surgery.

The second general goal of septal surgery is to maintain or to provide sufficient structural support for the cartilaginous nasal framework and, thus, for the soft tissue envelope as well.

The septum cartilage accounts for the nose’s profile and its axial orientation. Therefore, surgical measures can be applied in order to implement desired modifications of the shape of the nose on functional or aesthetic grounds. For example, a saddle nose, tension nose, or crooked nose usually cannot be satisfactorily corrected without septoplasty. Altering the septal cartilage might also affect the appearance of the nasal tip10 (Fig. 6.1).

Adjunctive septal procedures can be necessary in order to provide sufficient access for treating diseases of the paranasal sinuses and pituitary.

One must not forget the indication to close or minimize symptomatic perforations. However, this needs in particular thorough consideration of chances and risks.

Besides elective procedures, septal revision is a very common operation in patients who have sustained midfacial trauma.

Septal deviation in itself is not an indication for surgery. It is rare to find a perfectly straight septum, and ridges on the premaxilla or posterior spurs are considered normal to some degree. Ideally, functional deficits should be detectable by measurements before they are considered an indication for surgery. However, perception of nasal breathing is a multifactorial issue and the patient’s discomfort is not necessarily reflected in the objective tests. In some circumstances, subjective influences can be as much of a concern in functional septal surgery as it is in pure aesthetic nasal surgery.

When there is evidence of a more or less active Wegener’s granulomatosis or comparable conditions that are based on vasculitis of small vessels, the septum should be left alone. Once the disease is in remission, opinions differ. I would recommend not to touch the septum or to be extremely conservative.

Strict criteria have to be applied in selecting children for septal surgery. Through the growth of the nose, a septum deviation can also lose relevance for the nasal resistance and, not infrequently, after puberty a predisposition of congested membranes declines due to hormonal changes. Surgery might be indicated only in severe cases. When atraumatic, structure-conserving techniques are used, the surgical correction of an obstructive deviated septum may be considered as early as 4 to 6 years of age. Whenever possible, major resections of the vomer should be avoided before 12 years of age.11 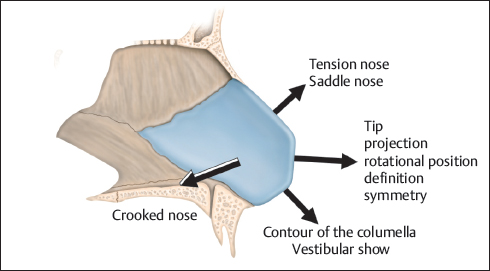 Fig. 6.1 Possible effects of the septal cartilage on the shape of the external nose.

It should be established preoperatively whether the septoplasty is being done purely for functional improvement, is part of a complex operation with both functional and aesthetic goals, or is a means for effecting purely aesthetic changes in the shape of the nose. The intents of septoplasty can have various implications, even such as the deliberate decision to leave a functionally significant septal deviation alone in selected patients. In some rhinoplasties that involve the broad mobilization of anatomical structures, the septum may provide a secure pillar that can prevent dynamic instability of the nasal skeleton. Consequently, the patient should understand that it may be necessary to accept a certain disparity in nasal breathing between the two sides of the nose—although a severe airway obstruction should not be allowed to persist. Similarly, the patient must be informed that undesired changes in the shape of the nose may occur that require immediate additional rhinoplasty or that become apparent only at follow-up. For this reason, it is advisable to obtain photographic documentation even for a “simple” conventional septoplasty.

Septal surgery comprises several variants and modifications. The method used depends on the patient’s findings, the intent of the operation, and on the individual preferences, experiences, or skills of the surgeon. Usually there is always a continuous intraoperative situational adaptation of the surgical measures. However, one question should be clarified well in advance of the intervention: Is an extracorporeal procedure via an open approach necessary? When I am uncertain, to be on the safe side, I usually decide in favor of the extracorporeal septum correction.

The condition of the mucosa is an important factor for successful surgery. It is a good idea, whenever improvement seems possible, to suggest preoperative treatment of the mucous membranes to the patients. Intraoperative bleeding, postoperative complications, and morbidity in the healing period can be prevented.

The goal of function-improving septoplasty or septorhinoplasty and optional turbinate surgery must not be to transform the nasal airway into a clear cavity that allows maximum theoretical airflow through the nose. A certain resistance is inherent to healthy nasal breathing. It is important to recognize that the septum, the turbinates, and the lateral nasal wall act in concert to create and maintain a cleft-like airway providing physiologic airstream. Especially the inferior turbinate is able to compensate alterations of the flow space geometry in order to restore or preserve its cleft-like configuration. This implies not only a reactive hyperplasia, e.g., in the case of septal deviation or saddle nose deformity, but also, vice versa, the potential of flow-depending regression when the airstream is normalized through nasal framework correction. Consequently, the treatment of turbinate hyperplasia consists, in the first instance, of changing the flow conditions that primarily affected the erectile tissue. There is no justification for a “routine” turbinoplasty that aims for lowering nasal resistance.12 This is supported by computational fluid dynamics (CFD). It revealed the turbinates as being only secondary flow formation structures.8,13 However, before correcting the septum, it may be necessary to lateralize or “trim” the middle and/or inferior turbinates to create sufficient space on the concave side. In rare cases, even an ethmoidectomy might be considered in order to position the middle turbinate more laterally. Regardless of the specific surgical method that is applied to the turbinates, the surgeon should always bear in mind that it can influence the inner milieu in the long term.1,8

The narrowest part of the nasal cavity is the isthmus nasi—also named internal orifice. It is located behind the nasal vestibule and represents, literally and figuratively, the bottleneck of the nose (Fig. 6.2). The isthmus is bordered by the septum, the nasal floor, and the nasal sidewall, where the upper and lower lateral cartilages are overlapping (Fig. 6.3). Already smallest alterations of the size and/or shape of the nasal cavity’s cross section in this region can significantly influence the airflow with, according to Hagen–Poiseuille’s law, a disproportional increase of the nasal resistance. Furthermore, the relative size of this airway constriction is one determinant of the nasal valve’s reaction to the inspiratory airstream—besides the strengths of inspiration and the elasticity of the nasal sidewall. For a better understanding, one has to distinguish between the primary airway constriction and the consecutive valve mechanism referring to a starling resistor.14