The patient consultation considers both the potential for anatomic improvement as well as the patient’s expectations.

Maintenance of facial “harmony” is paramount.

A “high SMAS” facelift vertically repositions the skin and the subcutaneous tissues as a single unit.

Triggered by the appearance of surface laxity, early attempts at facial rejuvenation focused on skin excision. Since the surface skin was sufficiently mobile to efface anterior redundancy, undermining and release seemed unnecessary. Limited peripheral skin excisions dominated the gestation period of facelifts,1–3 in the first quarter of the 20th century. While these procedures yielded improvement, they were limited in anterior effect and temporary in duration.

The presence of the subcutaneous facial mass may have been recognized as early as the 1930s by Pires.11 Pires placed suspension loops from the preauricular fascial to the anterior nasolabial fat in an effort to better efface anterior jowling. But the importance of specific suspension of the subcutaneous mass, in addition to skin redraping was best described by Aufricht in 196012: “In order to understand the mechanics of the sagging cheek, one must consider the behaviour of the skin and the areolar fatty layer separately. Both layers are subject to histo-morphological changes of their own. This fact is important. It indicates that the surgical correction for sagging cheeks generally requires a two phase procedure: (1) subcutaneous suspension (or lift), i.e., suspension of the fatty areolar layer; and (2) cutaneous suspension after the removal of excess skin.”

The concepts of removal and/or repositioning of both the skin as well as the subcutaneous fatty mass remain the cardinal points of modern surgical facial rejuvenation. What to do is generally agreed upon. How best to do it remains controversial.

First and foremost, cosmetic surgery is only appropriate for healthy patients. As physicians, our overriding responsibility is to do no harm. A patient’s life should never be placed at significant risk for improvement of appearance. Intercurrent illnesses such as cardiac disease, cerebrovascular disease, major organ dysfunction, and potential healing impairment may preclude safe surgery.

Assuming the patient is healthy, the evaluation turns to the anatomic analysis. From my perspective, maintaining facial harmony is paramount. The worst of all outcomes is to look “operated”. The are a number of causes of an “operated” look, and these will be addressed in more detail later in the chapter. But surgical disharmony – that is, correcting one aging feature while leaving other aged areas uncorrected – is disharmony by design. Regardless of the effectiveness of the surgical technique, segmental disharmony compromises the result.

Young patients may have only segmental aging. Most commonly, early aging involves the forehead and orbit before the lower face and neck. If the only disharmony is brow ptosis, a forehead procedure alone may suffice. The same may be true regarding the eyelids in young patients. In such a situation, correcting a single aged feature, so as to match the remaining youthful features, actually restores facial harmony.

However after the age of 40, most patients have aging changes throughout multiple areas. They may look slightly aged, but they look natural, since all areas match. If natural facial harmony is to be maintained, all aged areas need simultaneous correction.

Such an approach is often met with resistance by patients, particularly young patients. They are used to the traditional approach of sequential segmental surgery – an approach that most of us were trained to do. Adding to the confusion is the patient’s faulty logic that, by doing less at a single stage, they are less likely to look operated.

While debate remains regarding the relative roles of deflation (loss of fat) and descent, there are several inescapable truths.

The practical fact is that aging patients have lax facial tissues. And when standing erect (as most people judge their appearance), gravity causes the facial tissues to descend. The second fact is that aged people have excess facial skin. Re-inflating the skin envelope to the point of eliminating laxity would create an unattractively puffy face. Third, the descended tissues look better when repositioned superiorly. Finally, a method of maintaining the tissues in their upward position has to be found, even if the repair is non-anatomic.

While the “high SMAS” approach to the cheek is the assigned focus of this chapter, the need to maintain facial harmony necessitates a brief description of pan-facial analysis.

Starting at the top, forehead analysis begins at the hairline. The determination of hairline height is assessed from mid-pupil to hairline – not brow to hairline. While forehead rejuvenation is colloquially referred to as a “browlift”, the brow is actually only one element of forehead improvement. Lateral brow hooding, corrugator lines, and procerus creases also must be addressed. Perhaps most important, the upper lid cannot be correctly assessed without restoring the brow to proper position. The upper eyelid and brow thus form a combined unit. A similar combination occurs with the lower eyelid and cheek. Finally, the neck serves as a relatively independent unit, though its best correction often involves addressing the lower face. We will focus here in detail on the lower eyelid and cheek.

The lower eyelid and upper cheek overlap, and as a result, they should be addressed together in the patient over the age of 40. The delicate lower eyelid is separated from the heavier cheek by two fascial partitions. The orbicularis retaining ligament13 (orbitomalar membrane14) extends from the junction between the pre-septal and periorbital portions of the orbicularis muscle to attach to the bony skeleton. The orbicularis retaining ligament (ORL) inserts into the orbital rim medially, then courses down and lateral onto the body of the zygoma. A second fascial partition, the malar membrane15,16 (zygomaticocutaneous ligament17) extends from the lower border of the periorbital orbicularis to insert in the malar bone below. Medially, the malar membrane origins align with the orbicularis retaining ligament at the medial tear trough. Laterally, however, it courses obliquely across the cheek, inserting into bone in the bare area above the deep origins of the upper lip levators. Together, these two partitions protect the eyelid suspensory apparatus from the weight of the cheek.

There are six essential elements of the lower eyelid which require assessment. Beginning from deep: (1) the prominence of the orbital bony rim – a positive, negative, or neutral vector orbit; (2) the prominence of the arcus marginalis insertion; (3) the competence of the orbital septum and fat herniation; (4) presence of orbicularis ptosis; (5) skin laxity and wrinkling; and (6) competence of the lateral canthal tendon. Essentially, all aging patients develop ptosis of the orbicularis muscle. They may or may not have abnormalities of any or all of the other elements.

For the purposes of this chapter, we will focus on the degree of facial laxity and the variations of contour of the subcutaneous fatty mass.

Variations in the volume, shape and position of the subcutaneous fatty mass influence the ultimate surgical plan. The superficial layer of the subcutaneous fatty mass – that portion external to the superficial layer of the mimetic muscles – is the portion which influences facial shape and which is most malleable in facial rejuvenation surgery. The upper border of the fatty mass is at the lower orbital rim and zygomatic arch; the lateral border is the auricle, the lower boundary is the mandibular border, and the medial border is the fusion plane at the nasolabial fold.

The specific sub-areas to be addressed are the malar prominence, the nasolabial fold, and the jowl (Fig. 11.7.1). The typical aging face shows descent of the malar portion of the subcutaneous mass, so that the maximal cheek prominence is sub-malar, rather than over the body of the zygoma. Anteriorly, the upper anterior portion of the cheek fat shelves over the fixed fusion plane at the nasolabial fold. And finally, the lower anterior fat accumulates along the jowl at the mandibular border. The analysis of the individual patient, involves identifying the extent of each of these changes. 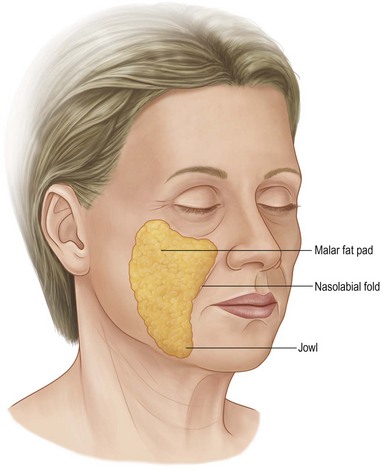 Finally, before formulating a surgical plan, the surgeon must decide whether the patient’s goals are both achievable and realistic.

Sometimes, the patient’s analysis of the problem is accurate, but there may not be a predictable correction. Making a full face thin or permanently removing every wrinkle are examples. Conversely, the patient may grossly exaggerate a minor problem and seek an unrealistic result. Surgery should be avoided in both situations. Often, the accurate evaluation of the patient’s mind is more difficult than the evaluation of their anatomy.

Evolution of the “high SMAS” technique

The modern “high SMAS” technique evolved from my (the author) failed experiences with other methods. Early in my clinical practice, I performed a moderately wide skin undermining with redraping. It yielded good results in younger patients who had excellent quality skin, thin faces, and good lower orbits. I believe the procedure can still yield good results in that sub-group of patients.

But not all of my patients were of that type. As I encountered older patients, those with more jowls and deeper nasolabial folds, my results with skin-only facelifts were often disappointing and brief in duration. Worst of all, as I became more aggressive with the procedure to overcome these deficiencies, some patients developed a “stretched” look. It was then that I became acutely aware of the viscoelastic relaxation (“stress relaxation”) of skin placed under tension.

Aufricht12 and others18 had pointed out the need to directly address suspension of the subcutaneous facial fat as an essential component of facelifting. I, therefore, went through a phase of skin dissection followed by suture plication, as described by Aufricht. My experience was that the initial facial contours of the nasolabial fold and jowl were improved. But in follow-up, only about one-half of the patients achieved a lasting correction. Moreover, using the dermis to secure the skin advancement still caused many patients to look “stretched”. My overall results improved, and some patients maintained a natural improvement, but the results were too inconsistent for my satisfaction.

Other surgeons21,22 adopted Skoog’s basic idea, and set out to modify it. Their early attempts focused on the buccal and mandibular area, where the SMAS was more defined and more mobile. The upper cheek, or malar area, was left only dermal support.23 It seemed clear to me that such differential suspension – fascia in the lower face, and only dermal suspension of the malar portion of the subcutaneous fatty mass – would give incomplete repositioning of the malar prominence. And worse, over time, the weak dermal support would relax faster than would the lower fascial portion.

It was that dilemma that fostered our anatomic dissections in the late 1970s and early 1980s.24,25