Indications: Patients who lack adequate height of the bony and/or cartilaginous dorsum may require dorsal augmentation (Figure 16-1). In general, a desirable dorsum for a male patient should be a fairly straight line from the radix to the tip. In women, a slight depression (about 2 mm) below this line (supratip break) may be more appropriate. A “saddle nose deformity” might be a consequence of prior trauma, including necrosis of the supporting septal cartilage secondary to cocaine use. Management requires the addition of supporting material to reconstruct the deficient framework and re-elevate the depressed soft tissues. Historically, a number of replacement materials have been described, but the authors strongly prefer autogenous tissue. Autogenous tissue offers greater resistance to infection than allo-plastic material, which is prone to infection and extrusion long term. Cartilage provides a good replacement material since it is autogenous and readily available from the septum, ears, and ribs. In patients who are graft depleted or require greater elevation, bone graft from variable sources (rib, calvarium, iliac crest) can be used. Generally, cartilage is preferred over bone because the latter is hard, brittle, and prone to resorption. In the absence of adequate tissue and/or the desire to avoid donor site morbidity, biocompatible alloplastic materials, such as polyethylene and polytetrafluoroethylene (PTFE), have been utilized.1,2 The choice of implant is at the discretion of the surgeon and should be based primarily on patient safety. 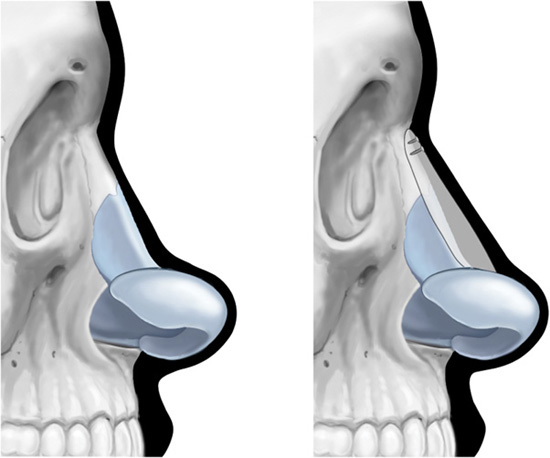 Markings: No specific markings are required, although the relative contributions of the nasal bones and the septal and upper lateral cartilages should be identified preoperatively. The specific area of deficiency and a rough estimate of the boundaries of the soft tissue pocket should also be noted. External incisions for an open approach are similar to those described previously.

Approach: Modification of the dorsum may be performed via an open or an endonasal approach, but in order to visualize the recipient bed, an open approach is recommended (Figure 16-2). In either the open or closed approach, scissor dissection then proceeds over the septum to the radix. (Figure 16-3). The soft tissue pocket over the dorsum should be made just wide enough to facilitate placement of the graft but not wide enough to permit undesirable malposition. The dorsal aspect of the nose should be sufficiently rasped to create an osseocartilaginous surface to which the graft can incorporate. 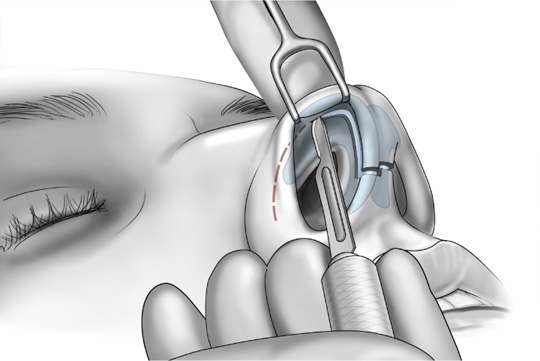 Figure 16-2. Approach to the dorsum via a transcolumellar incision. 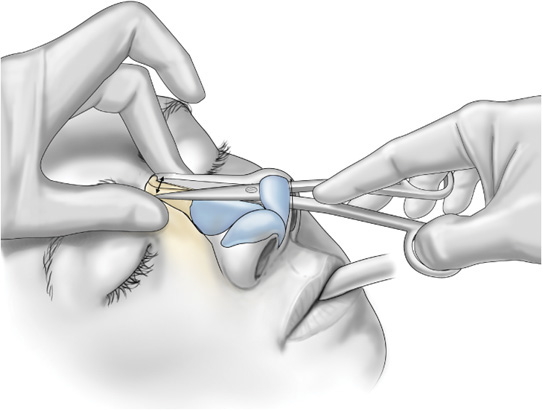 Figure 16-3. Creation of a dorsal pocket just above periosteum for placement of a graft.

Septal cartilage: Septal cartilage may be used for augmentation up to 2 mm. However, septal cartilage is frequently used for other grafts or is unavailable. When available, it is easily harvested through a septoplasty approach. It can then be shaped and sutured into its desired position.3

Rib cartilage: Rib cartilage can be harvested in a multitude of dimensions and is generally abundant in younger and middle-aged patients. There may be some calcification in older patients, and a CT scan can be obtained to identify this calcification preoperatively. The rib is harvested as described above (Chapter 12