Patient factors related to an increased risk of dislocation have been reported to be female gender, patient age greater than 70 years (or greater than 75 years), and preoperative diagnoses of osteonecrosis and acute femoral neck fracture.1,7 Other patient factors implicated in a higher rate of dislocation include “cerebral dysfunction,” history of alcohol abuse,7 and an impaired sense of balance. Another study suggested that a higher prevalence of dislocation was related to a decreased length of hospital stay.8 Surgical factors are extremely important and include patient volume, surgeon experience,9 acetabular malposition, a skirted modular femoral head, and large-diameter (≥62 mm) acetabular components combined with small (22- and 28-mm) femoral heads.10

Dislocation is more common after revision total hip arthroplasty, with prevalences of 10% to 25% being reported.11 Factors implicated in these procedures include soft-tissue deficiency, nonunion of the greater trochanter, leg length discrepancy, and the use of a large, long-taper revision femoral component.11 A very high rate of dislocation has been reported with isolated acetabular revisions and polyethylene liner exchange procedures for wear (Table 58-1). Dislocation has been reported in 18% to 25% with liner exchange performed through the posterior approach12,13 and in 0% to 28% of hips with use of the anterolateral or direct lateral approach.14–16 The cause of dislocation in these cases is multifactorial and includes the soft-tissue dissection required for exposure, leg length discrepancy, synovitis-stretched capsule, and the head-neck ratio or offset of the retained femoral component. The use of a prophylactic hip orthosis has been suggested to limit the postoperative range of motion after certain revision procedures,17 including isolated acetabular revision through the posterior approach, liner exchange for wear and osteolysis, and reimplantation of an infected total hip arthroplasty, but there are no data yet to prove the efficacy of this device.18 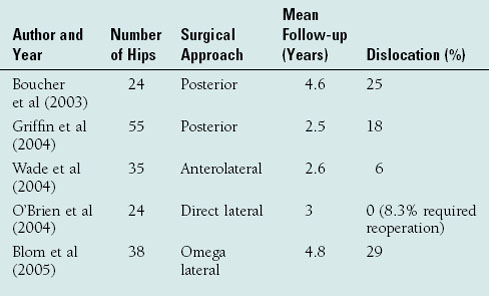 The treatment of an “early” postoperative dislocation after either a primary or revision total hip arthroplasty is closed reduction. It is important to treat a dislocated hip prosthesis expeditiously if possible. Although occasionally the hip may be reduced in the emergency room without analgesics and intravenous sedation, there have been reports of dissociation of modular components (femoral head off the taper) and disruption of component fixation (both femoral and acetabular) with forceful reduction maneuvers.17 Spinal anesthesia or general anesthesia with intravenous muscle relaxation is recommended for reduction of a dislocated hip to avoid these complications. The hip should be put through a range of motion after reduction to determine the “safe zone” of motion and for prognostic purposes. Although immobilization has not been proven to lower the risk of recurrent dislocation, placement of the patient into a hip orthosis or hip spica cast after a first dislocation is recommended to put the soft tissues at rest and avoid an early recurrence.17 However, the efficacy of this type of immobilization in preventing recurrence of dislocation has not been proven in a prospective, randomized study.18 If the hip is extremely unstable after reduction and the cause of the dislocation is obvious, the patient should be counseled appropriately that early revision will be necessary. In several studies the risk of recurrence after an early dislocation was approximately 33% to 40%.1,7 Rarely, an open reduction may be required if the dislocation cannot be reduced and closed under general anesthesia or if there is dislocation of constrained components.

Some patients have a dislocation for the first time 5 years or more after a total hip arthroplasty. The risk factors for a “late” dislocation include female gender, previous subluxations, substantial trauma, and new-onset cognitive or motor neurologic impairment. Radiographic factors associated with late dislocation include polyethylene wear >2 mm, implant loosening with migration or a change in position, and initial malposition of the acetabular component. In one series of late dislocations, 7% of hips required an open reduction after closed reduction was unsuccessful.19 The late dislocation recurred in 55% of all hips, and 61% of the recurrent dislocations had reoperation. Despite this prognosis, closed reduction and immobilization with a hip orthosis is recommended after a first late dislocation. Patients should be counseled that revision surgery will likely be necessary.

EVALUATION AND TREATMENT OF RECURRENT DISLOCATION

A careful clinical and radiographic evaluation of the patient and the total hip components should be performed before reoperation for recurrent dislocation. The patient should be evaluated and treated, if possible, for any cognitive dysfunction or neurologic motor disorder. The length of the legs, range of hip motion, and abductor muscle function should be carefully examined. The components should be evaluated for loosening or migration by comparison of serial radiographs if available. The abduction angle of the acetabular component should be measured on an anteroposterior pelvic radiograph. Anteversion of the acetabular component can be estimated using a cross-table radiograph or the methods described by Ghelman or Ackland and colleagues, respectively.17 Comparison of the offset of the replaced and native hips and an anteversion study of the femoral component may be helpful if femoral component malposition is suspected.

With early dislocation, a factor associated with the dislocation can be identified in only approximately two thirds of the patients. These include acetabular component malposition, femoral component malposition, leg length discrepancy (shortening), trochanteric avulsion or nonunion, damage or absence of the capsule, inadequate femoral offset, and bone or prosthesis impingement. In the study of late dislocation, a clinical factor could be identified in only 25% of patients, and a radiographic factor in only 34% of patients.19