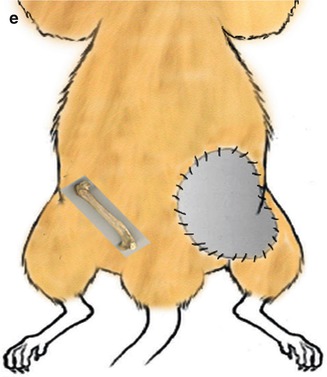 Group II (Bilateral VSBM + VSBM, n = 5): Combined vascularized skin and femoral bone flap, based on the femoral vessels was transplanted bilaterally to the recipient’s right and left groins (Fig. 22.1b).
3.

Transplantation of Vascularized Skin (VS) Flap (Fig. 22.2a, b) 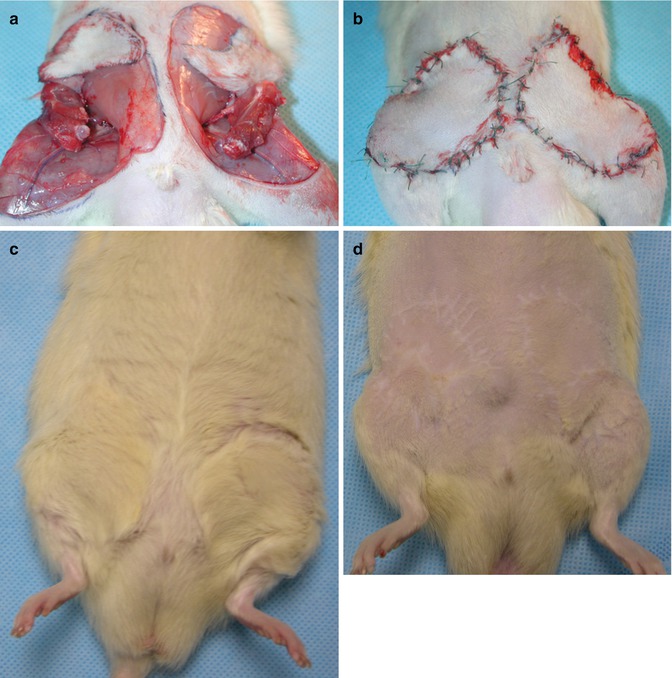 (a) Double vascularized skin-bone isograft transplanted to the recipient’s groin region bilaterally. (b) Early postoperative view of the double vascularized skin bone marrow isograft transplant. (c) Transplanted isografts with nice hair, day 250 postoperative. (d) Transplanted isografts shaved to show suture lines, day 250 postoperative
A standard 4 × 6 cm template was used to mark the skin flap on the donor’s epigastric region and the skin flap was harvested based on the epigastric artery/vein and femoral vessels. Using the same template the same-sized defect was created on the epigastrium of the recipient by the excision of the skin and SQ tissues. The femoral vessels were prepared for the vascular anastomosis. Femoral arteries and veins were anastomosed with 10/0 nylon under microscopic magnification by an end-to-end fashion. Skin was closed with resorbable 4/0 suture material (Vicryl, EthiconTM).

Transplantation of Vascularized Bone (VB) Flap (Fig. 22.2a, b)

First, the skin covering the thigh region of the donor limb was degloved. Next, femur was disarticulated from the knee joint. Anterior, posterior and lateral thigh muscles were removed but the periosteum of the thigh was preserved. The adductor muscles were dissected and the muscular branch of the femoral artery and superior genicular artery, which supplies blood to femoral bone was preserved. Thereafter, the hip joint was disarticulated, medial and lateral circumflex arteries were ligated and femoral vessels were prepared for anastomosis.
In the recipient, groin skin was incised parallel to the inguinal ligament and femoral vessels were prepared for the vascular anastomosis. The donor bone flap was placed in the inguinal region without bone fixation. To avoid kinking of the vascular pedicles the femoral head was positioned inferomedially. Standard end-to-end microsurgical vascular anastomosis was performed between donor and recipient’s femoral vessels under microscopic magnification using 10/0 nylon. Skin was closed with resorbable 4/0 suture material (Vicryl, EthiconTM).

Transplantation of Vascularized Skin/Bone (VSB) Flap (Fig. 22.2a, b)

Combined donor groin and femoral bone flaps based on the femoral vessels were harvested as described previously. A 4 × 6 cm skin defect was created on the recipient’s epigastrium and the femoral vessels were prepared for anastomosis. The combined skin/bone flap was transplanted to the recipient as described above and standard end-to-end microsurgical vascular anastomosis was performed between donor and recipient’s femoral vessels under microscopic magnification using 10/0 nylon. Skin was closed with resorbable 4/0 suture material (Vicryl, EthiconTM).

Evaluation of the Transplants

Transplant recipients were evaluated on a daily basis for any signs of flap failure. Skin flap was observed for color and temperature changes, hematoma, and progressive edema in the early postoperative period, and thereafter for hair loss, desquamation, epidermolysis, exudation and stiffness.

The skin samples were harvested from the transplanted skin flap and fixed in formalin solution (10 %). Femoral bone samples were harvested, fixed and decalcified in formic acid solution (5 %) for 3 days, and skin was fixed in formalin solution (10 %). Fixed specimens were embedded in paraffin and 3 μm sections were stained with Periodic Acid Schiff (PAS) and Giemsa dyes. Skin and bone specimens were evaluated histologically for the viability of the combined skin/bone flap components.

The mean operation time was 45 min for vascularized skin, 60 min for vascularized bone, and 90 min for vascularized skin/bone transplantation, respectively.
In the early postoperative period 2 out of 25 isograft transplant recipients died (group II) due to the blood loss and they were replaced. All animals returned to their normal activities within 3 days post-transplant. Successful transplantations were accomplished in all groups with 100 % graft survival up to 250 days follow-up period.
The viability of the transplanted flaps was evaluated clinically and histologically. Clinically all skin flaps remained pink and pliable and grew new hair (Fig. 22.2c, d). Viability of the compact bone and functional bone marrow with active hematopoiesis was confirmed by histology at 100 days post-transplant (Fig. 22.3). 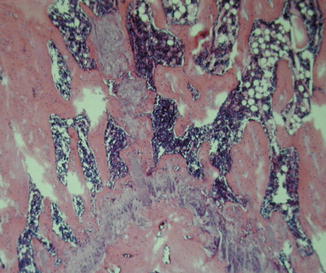 Viability of the compact bone and functional bone marrow with active hematopoiesis was confirmed by histology at 100 days post-transplant (PAS 125×)
The most extensive transplantation procedure was performed in-groups II and III, in which the mean weight of the animals was reduced by 2–6 % during the first postoperative week. However, they quickly recovered within 1 week. There was mild to moderate hematoma formation observed under the skin flaps in the vascularized skin/bone transplantation groups, which resolved spontaneously between 8 and 12 days post-transplantation. There was no auto-cannibalization observed.

Although there is a significant plea for routine use of allogeneic composite tissue transplantations, the necessity of life-long immunosuppression for the prevention of chronic rejection is the most important risk factor for the future of the CTA transplantations.
Up to date, the immunosuppressive treatment modality that would allow for bone marrow expansion leading to a chimeric state as well as the level of chimerism that is necessary for the recipient’s unresponsiveness and maintenance of this chimeric state are unclear [15]. Moreover, the quantity [16] and the timing [17–19] of bone marrow delivery are important factors that affects the engraftment and trafficking of tolerance induction cells. There are various additional variables including graft size [20–22], MHC-related donor antigen load [23], donor age [24, 25], race [26], and genders [25], that may affect the outcome of solid organ and CTA transplants in combination with BM delivery.
There are some issues that should be addressed in order to facilitate bone marrow transplantation (BMT) in a clinical scenario of tolerance inducing protocols:

The reliability of new tolerance inducing protocols for various tissue types have to be confirmed in small and large animal models.
2.

The role and trafficking of donor-derived stem and progenitor cells for inducing and maintaining donor-specific tolerance and their cellular and molecular mechanisms are needed to be investigated. So far, the data and reports on this topic are limited [27–30].
3.

New Strategies to overcome the toxicity of the conditioning regimens, graft versus host disease and immune-competence of the recipients should be developed [31–39].
Thus, new experimental models should be developed to identify, isolate and engraft active tolerance inducing BM derived cells with no need for chronic immunosuppressive protocols.
In the current study, we have introduced bilateral transplantation models of various combinations of vascularized groin skin and femoral bone flaps. It was suggested that donor origin bone marrow transplantation along with its intact stromal microenvironment could provide an optimal condition for hematopoietic stem and progenitor cells engraftment and maintenance of a stable hematopoiesis [40, 41]. In our transplantation (VSBM) model, the transplanted vascularized femoral bone provides the natural microenvironment for the donor origin hematopoietic stem and progenitor cells with a viable bone marrow which acts as a reliable source of donor specific BM delivery.
Dendritic cells (DCs) are known as the most potent antigen-presenting cells (APC) with ability to initiate and maintain primary immune responses when pulsed with antigens [42]. Langerhans cells are a subtype of dendritic cells, which exist in the skin [43, 44]. Bilateral vascularized groin skin flap transplantation in our model (Group I) could act as the source of the immunogenic tissue (skin) delivery. In the vascularized groin skin transplantation group, skin allograft size is augmented to increase the number of delivered Langerhans cells. Hypothetically, it is rational to suggest that augmented application of the antigens should better stimulate the recipient’s immune system. Theoretically, there are two possibilities; the augmented skin transplant may accelerate acute rejection by delivery of higher numbers of antigen presenting cells, or under proper immunosuppressive therapy, it may induce a state of microchimerism and supply long-term transplant acceptance with reduced need for immunosuppression (state of immunologic tolerance).
We performed bilateral vascularized skin/bone transplantations in–group II. In this group, the amount of both skin (antigen) and bone marrow (stem cells) transplants was increased. Bilateral transfer of the vascularized donor femoral bone allowed us for the repetitive sampling and comparison of the transplanted donor BM in different time periods post-transplantation by means of histological, immunohistochemical and fractionation studies.
The allogeneic BM transplantation is established as a robust way to induce tolerance under the cover of limited immunosuppressive therapy [17, 36]. BM augmented organs showed improved graft survival and better function with limited number of rejection episodes and reduced immunosuppressive requirements [45, 46]. It has been suggested that the antigenicity and the migratory cell load plays a very important role in the development of chimerism, GVHD and rejection during the drug-free state [47]. The increase in bone marrow delivery was associated with improved engraftment thus improved allograft survival. Nevertheless, increased GVHD incidence was reported as the side effect [48].
There is a need for further experimental data to clarify the suppressing or enhancing responsiveness following donor BM transplantation. Another important variable for the progenitor cell engraftment and subsequent tolerance induction is the timing of the BM administration [48]. Double vascularized skin/bone marrow transplantation model could allow for simultaneous or consecutive transfer of the free tissues containing vascularized skin, vascularized bone or vascularized skin and bone marrow. The skin component serves for in vivo monitoring of immunological responses. Moreover, transplanted skin acts as an augmented source of constant antigenic stimulus. The alterations in the recipient’s immune response to the donor tissues can be directly noticed by observation of signs for rejection process including; skin edema, hair loss, erythema, desquamation and scaling. These findings can be established by immunohistochemical, histological and fractionation techniques as well as flow cytometry assays. These models allow studying the mechanisms of tolerance inducing strategies in the presence or absence of vascularized bone marrow transplantation (hematopoietic stem cells) and augmented skin component (antigen load).
There are various advantages of these groin flap/femoral bone transplantation models and they could serve as a versatile model for the studies on BM based tolerance-inducing strategies as described below:

This model may be useful for creating appropriate simultaneous immunosuppressive or immunomodulatory treatment modalities for induction and maintenance of donor specific tolerance.
Only gold members can continue reading. Log In or Register to continue