– ANTIOXIDANTS: EXTENDING THE SHELF LIFE OF YOUR PRODUCTS

LIFE OF YOUR PRODUCTS

Antioxidants are being used for several purposes in the personal care industry, ranging from prevention of rancidity in formulations to sun protection and prevention of skin aging. These materials are generally used to neutralize free radicals, which may result from improper storage of the formulation or environmental stress on the skin.

Oxidation in formulations is a result of the generation of free radicals that convert unsaturated fatty acids in the contained oils into undesirably odoriferous molecules. These free radicals can be generated by heat, light, and metal ions. Antioxidants quench the formation of these free radicals, thereby reducing the rate of oxidation and subsequently increasing the shelf life of the product.

Traditionally many synthetic antioxidants have been used for the above-mentioned applications. However, due to heightened consumer awareness and toxicity questions, many of these synthetic ingredients have come under scrutiny. The cosmetic and personal care industry has responded to these issues by seeking and finding materials better suited to address these issues. There are several plant-based antioxidants available that can perform as well or better than their synthetic counterparts in these applications. This chapter will focus on various applications of natural antioxidants in extending shelf life of formulations.

Oxygen, despite being necessary for sustaining life, is also detrimental in many aspects. The damaging effects caused by the ubiquity of oxygen have been classified as “oxidation reactions.” Some of the common negative observations attributed to oxidation include: browning of fruits and vegetables over time, rusting of iron, and even aging. One of the principle causes for the reduction in shelf life of cosmetic products is oxidation of unsaturated oils. Unprotected cosmetic products, when exposed to environmental factors such air, light, and high temperatures, are susceptible to oxidative degradation. This process results in discoloration, off-odor, and also physical instability of the products.

The oxidative-degradation products include peroxides and hydroperoxides. These products are not the primary source of the debilitating effects observed in the formulations, but rather, it is their degradation products such as aldehydes and ketones that cause undesirable visual and sensorial changes in the formulation. [1] [2] Although the mechanisms responsible for lipid oxidation have been studied extensively, as of yet they are still not fully understood. The rate at which oxidation of lipids occurs and the pathway it follows depends upon several factors such as the degree of unsaturation, the presence of other components in the system, and the physical state of the system. [3]

Antioxidants have become an indispensable group of additives to cosmetic formulations. [4] They not only effectively retard the onset of oxidation in products but can augment the consumer’s natural topical defense system against oxidation. Most antioxidants are phenolic compounds, which have the ability to donate a hydrogen free radical easily and in turn get oxidized. [5] Both natural and synthetic antioxidants have been used in cosmetic products to improve their shelf life. [6] Many currently used synthetic antioxidants have been under extensive scrutiny due to concerns over their safety. In addition to this concern for safety, consumers are becoming more aware of the sources of ingredients being used in their personal care products and are demanding that they be obtained from natural, sustainable, and safe sources. Plants produce a variety of complex phenolic compounds to protect their internal “machinery” from oxidation. Some of these plant-based molecules exhibit remarkable antioxidation capabilities rivaling those of their synthetic counterparts.

Several key factors need to be taken into account to choose the right antioxidant for a particular system. The most important ones are: the oil component of the system; polar or nonpolar oils; potential impurities in the ingredients used, such as metal ions; physical state of the formulation; gels, oils, emulsions, etc.; desired shelf life of the product and manufacturing process; heated or cold ­processing.

Numerous assays have been developed to determine efficacy of antioxidants. These assays vary from measuring the kinetics of lipid peroxidation to measuring the primary and secondary oxidation product. Since many of these assays are not conducted in the final formulation, care should be taken in interpreting the obtained data. Regardless, these assays are good tools in providing insights ­concerning ­feasibility of the antioxidant.

The overall goal of this chapter is to provide the reader with an understanding of oxidation, how it affects a formulation, and how antioxidants can be used to improve the shelf life of a cosmetic or personal care product.

The phenomenon of oxidation is defined as loss of electron by a molecular species. The rate for a molecule to undergo oxidation depends on the activation energy needed to abstract an electron or a hydrogen free radical from it, which in turn depends on its molecular structure.

The basic mechanism of lipid oxidation has been very well characterized. This process can be divided into three distinct steps: Initiation, Propagation, and Termination. [3] [7]

Auto-oxidation of unsaturated lipids is thought to be initiated by free radicals, which can be generated by heat, metals, or other impurities; and enzymes and light in presence of oxygen. [8] In this process, the a-carbon atom to the double bond loses a hydrogen free radical and forms a lipid radical (Figure 1).

Table 1. Energy required for removal of hydrogen atom from different positions of c-atoms in linoleic acid.

Lipid radicals can also be generated by addition of free radicals to the double bonds of unsaturated lipids (Figure 2). [9]

Figure 2. Generation of lipid radical by addition of free radical to unsaturated lipids.

Light-induced initiation or photo-oxidation occurs in the presence of ­oxygen and a photo-sensitizer molecule such as chlorophyll or other electromagnetic radiation–absorbing species. In photo-oxidation, light excites the sensitizer molecule to its triplet state (3Sen*). This excited molecule then ­induces oxidation by one of the two mechanisms known as Type I or Type II. Figure 3 illustrates the general pathway for the two mechanisms. In Type I, the excited sensitizer can directly interact with the lipid molecule to generate lipid radicals which in turn starts a free-radical chain reaction, where the lipid radical can react with triplet state oxygen (3O2) to form peroxyl radicals (ROO*). In this case, the rate of reaction is dependent on the concentration and the type of sensitizer and substrate i.e. lipid molecules. In Type II, the excited sensitizer can interact with molecular oxygen, which is in triplet state, to form high-energy singlet oxygen species (1O2). The singlet oxygen can then react with lipid molecules to form hydroperoxides (ROOH). The rate of reaction for Type II pathway is primarily dependent on concentration and solubility of oxygen in the system. The resulting hydroperoxides can further dissociate into free radicals. [8] 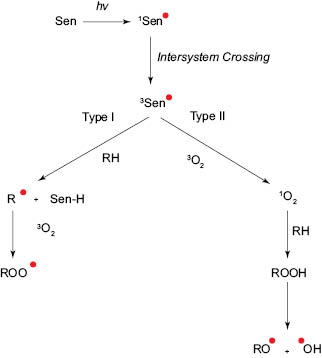 Figure 3. Light-induced initiation and reaction with the lipid molecule via Type I and Type II pathway.

Metal ions, such as Fe+2, Cu+2, and Co+2, can also initiate formation of free radicals by reacting with lipids (Figure 4). The generated free radical can then initiate a chain reaction. [10] [11]

The activation energy for generation of free radicals can also be supplied by heat or by the presence of enzymes. High temperatures during processing of oils can initiate the free-radical chain reaction and can lead to oxidative degradation of oils. Also the presence of enzymes in a system such as lipoxygenases or any hydrolytic enzymes can reduce the activation barrier for generation of free radicals.

The propagation reaction is repeated many times and continues as long as unsaturated lipids are available. The chain reaction nature of this phase results into accumulation of hydroperoxides. The hydroperoxide species generated in the system are dependent upon the molecular structure and the unsaturation level of the lipid. Lipid hydroperoxides are primary products of oxidative degradation and are odorless. [12]

The stable species generated during the termination step are considered as secondary products of oxidative degradation and most often are carbonyl compounds (aldehydes, ketones, or fatty acids). It is the presence of these reaction products that affects the sensory profile of the product, most often detected as off-odor and off-color. [12]

A simple definition of an antioxidant is a compound that opposes oxidation. Antioxidants are sacrificial molecules that undergo oxidation and slow down the oxidative damage done to the other molecules. [12] They tend to slow down oxidative reactions by inhibiting or retarding any or all of the three steps of auto-oxidation: initiation, propagation, and termination. The use of antioxidants is prevalent and necessary in cosmetic formulations, particularly the ones that use lipids. The shelf life of a product can be improved substantially by using the right antioxidants.

Figure 7 depicts the various free radical species that primary antioxidants (AH) can react with to form stable molecules and hence slow down the chain propagation and eventually the overall oxidative damage to the system. Primary antioxidants are typically phenolic compounds that can donate a hydrogen radical to the free radical species. In this process they reduce the primary radicals to nonradical species and in turn get converted to oxidized antioxidant species. Efficacy of an antioxidant depends on its molecular structure. Efficacious antioxidants can not only donate hydrogen radicals but can themselves form radicals that have low reactivity and low possibility of reacting with lipids. [11]

Figure 7. Reaction of antioxidant (AH) with a variety of free radical species generated during the auto-oxidation of lipids. 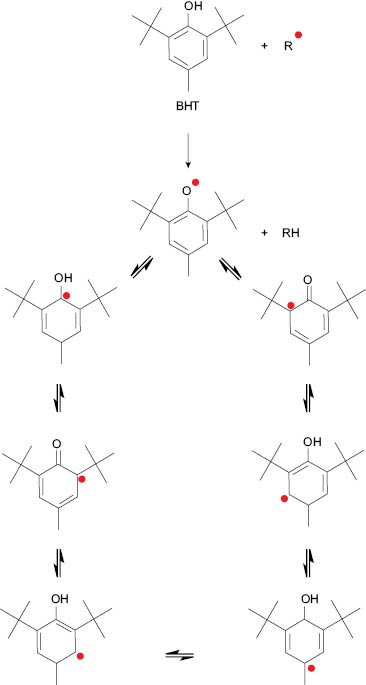 In addition to BHT, butylated hydroxyanisole (BHA) and tert-butylated hydroquinone (TBHQ) (Figure 9), are other synthetic antioxidants that have also been used in personal care formulations to prevent rancidity. [7] BHA is a mixture of two isomeric forms that are produced during its synthesis.