Radiographic evaluation of the hip before and after arthroplasty is the cornerstone of radiologic assessment. Together with the clinical evaluation and laboratory studies, radiographic evaluation serves as the first line of investigation of any hip pain, providing an overall view of the hip joint. Cross-sectional imaging may be used for disease confirmation and determination of severity and extent. The relative ease of radiographic comparison allows for more accurate monitoring of disease progression. In a postarthroplasty patient, subtle changes may often be indicators of loosening and hardware failure. More sophisticated imaging and image-guided interventions may then be used to determine the cause of failure, primarily to exclude sepsis.

The high prevalence of hip pathology and the broad success of hip replacement surgery have resulted in hip arthroplasty becoming a routine procedure, with an estimated 170,000 primary hip arthroplasties performed annually in the United States and approximately 35,000 revision surgeries performed as revision surgery.1 Although the types of prostheses continuously evolve, hip prostheses may be divided simply into unipolar, bipolar, and total arthroplasties, with the last divided further by bearing surface (metal on polyethylene, metal on metal, ceramic on ceramic, and ceramic on polyethylene). The specific type of prosthesis, surgical technique, and surgeon-related and patient-related factors play a role in the relative frequency with which complications occur.

Given sufficient time, all prostheses eventually fail. Detecting complications after arthroplasty is the result of thorough clinical investigation, history taking, examination, and judicious use of supportive radiologic and laboratory studies. Because component failure may have a protracted subclinical course, detecting any findings of malfunction relies heavily on routine radiographic assessment; these findings may be subtle, so a high index of suspicion is crucial. Close monitoring is necessary to detect complications that may limit the success of possible future revision surgery, such as the loss of adequate bone stock.

As for a hip before arthroplasty, radiologic assessment after arthroplasty begins with the basic radiographic examination, with an anteroposterior (AP) and lateral radiograph as a minimum exposure. These images should show the components in their entirety, extending above and beyond the hardware by several centimeters, so that adjacent soft tissues, bones, and cement restrictors may be analyzed. Routine postarthroplasty radiographic studies start immediately after the procedure, and are repeated at standard intervals, with many prosthetic hips often followed clinically and radiographically for the entire life of the patient on an annual or biannual basis. The strength of the radiograph includes the general overview that may be obtained, and the ability to compare directly for any changes with the most recent prior examination.

Although the specific causes and modes of failure for an individual prosthesis vary, prosthetic failure most commonly manifests as loosening. Radiographic assessment of the hip is aimed at the detection of loosening. Perhaps the most important question after the detection of loosening is determining whether the prosthesis has failed as a result of sepsis. The diagnosis of sepsis has a critical therapeutic implication, often resulting in a two-stage revision arthroplasty. In the first stage of two-stage revision arthroplasty, the hardware is removed, and antibiotic-impregnated cement is inserted. In the second stage, six weeks later, the new prosthesis is inserted. This is in contrast to the typical single-stage revision for all other causes of component failure. Available imaging modalities include arthrography, which has the ability to perform simultaneous arthrocentesis, ultrasound, CT, MRI, and nuclear scintigraphy. In addition to the imaging and clinical evaluation directed at detecting the presence or absence of hardware failure, soft tissue pathologic processes should be evaluated as possible sources of pain.

Aseptic (or mechanical) loosening is the most common cause for revision arthroplasty2 above osteolysis (“particle disease”) and infection (septic loosening). Aseptic loosening is often a diagnosis of exclusion, when studies for the cause of loosening are notably negative for infection, and the radiologic findings are not typical for osteolysis.

With respect to loosening, it is unrealistic to rely on simple radiographic observation to have the desired precision of detecting submillimeter motion. This is of significance particularly within the first 2 years after replacement when early motion is associated with a generally poor outcome. Precise measurement is now possible with the use of template matching algorithms3; this is improved further with the use of bone marking and stereometry.4 Despite these advanced methods, knowledge of the more familiar radiographic manifestations of loosening as assessed on observation is important because the above-mentioned technology is not universally available.

Criteria for the diagnosis of prosthetic loosening largely depend on whether cement has been used to secure the prosthesis. In the cemented prosthesis, simply measuring the size of the cement-bone interface provides a reproducible and standard method of assessing whether loosening has occurred. Regardless of the etiology, loosening of a cemented prosthesis manifests as an increase in periprosthetic lucency at the bone-cement interface of 2 mm or more. Progression of lucency (even if <2 mm), fracture of cement, and migration of components also are consistent with loosening.6 In the setting of revision arthroplasty, lucency greater than 2 mm is permissible; however, in this instance, reference should be made to the early postrevision radiographs.

The flange of the femoral stem ideally should sit flush with the cut surface of the femoral shaft. Movement occurring inferior to this level, or subsidence, is consistent with femoral prosthesis loosening. Lucency adjacent to the femoral stem should be described with reference made to the standardized Gruen zones (Fig. 2-1).7 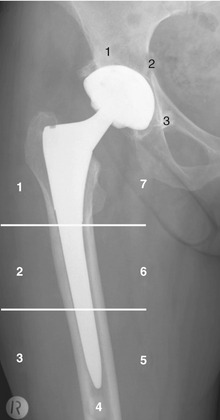 Insertion of a femoral component results in the well-known localized form of disuse osteopenia known as “stress shielding,” a phenomenon occurring secondary to the bypassing of mechanical forces. When this phenomenon is linked to the part of the prosthesis that is porous coated, in most instances, only proximal loss occurs8; however, in a proportion of cases, loss of periprosthetic bone density along the entire femoral stem may result in loosening (Fig. 2-2). In these circumstances, the osteopenia is typically more prominent laterally along the femoral stem (Fig. 2-3) and in the retroacetabular region, the latter best appreciated with CT.9 Stress shielding may predispose to periprosthetic fracture, usually at the tip of the femoral stem (Fig. 2-4), and more rarely to component fracture. A distal femoral cement restrictor plug may be used in order to form a seal that prevents distal cement migration so that adequate contact with the prosthesis may be optimized. Often, a small focus of entrapped gas can be visualized; this finding should not be a consequence of infection. 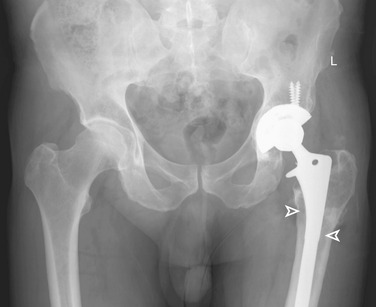 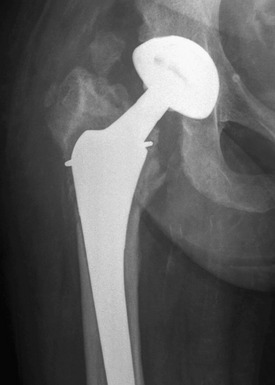 FIGURE 2-3 Anteroposterior radiograph of the right hip shows breach of the cortex of the proximal femur at the flange of the femoral stem, diagnostic of loosening. 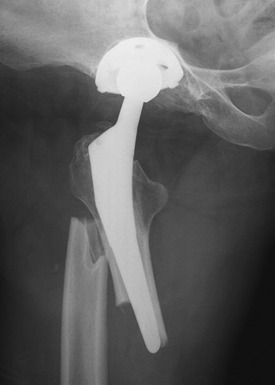 FIGURE 2-4 Oblique anteroposterior radiograph of the right hip shows a displaced periprosthetic fracture as a consequence of loosening. 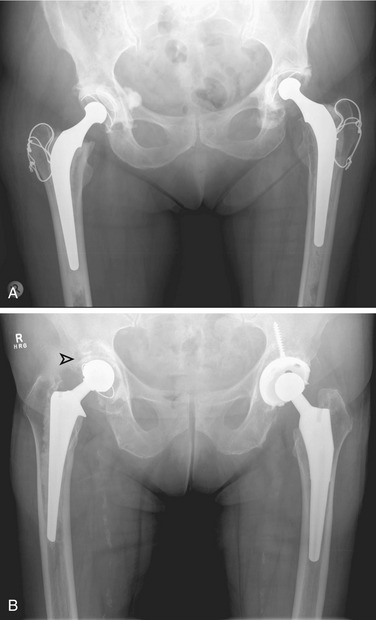 FIGURE 2-5. A and B, Anteroposterior radiograph of the pelvis after bilateral arthroplasty shows lucency at bone-cement interface (arrowhead) of all three Gruen zones of the acetabulum involving the left (A) and the right (B) hip.

The inclination of the acetabulum is an important and simple measurement; inclination is the angle of tilt that the acetabular component makes with the horizontal. Despite patient positioning, a horizontal line forms a standard reference and is drawn connecting the inferior-most aspect of both ischial tuberosities (the bi-ischial line) or both tear drops (the bi–tear drop line). Ideally, this angle should approximate 45 degrees (range 35 to 55 degrees), with an alteration in the inclination angle of greater than 4 degrees or movement greater than 4 mm compatible with loosening.13 A line drawn from the Köhler line (ilioischial line) to either the acetabular margin or the femoral head is used to exclude medial migration on subsequent evaluation. Any form of protrusion or intrapelvic migration also is consistent with acetabular component loosening.14

Multidetector CT, with its ability to reduce beam hardening artifacts (a significant limitation of conventional helical CT) has a higher sensitivity for the detection of periacetabular lucency (Fig. 2-6) and a higher rate for diagnosing early component loosening.15 Although the expense and high radiation dose limit the utility of CT as a routine investigation to detect acetabular loosening, this modality may be used when radiographic assessment is equivocal, or clinical suspicion for loosening is high when the radiographs are negative.15 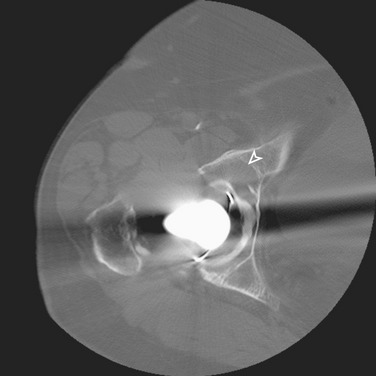 FIGURE 2-6 CT scan of the right hip clearly delineates a region of extensive periacetabular lucency (arrowhead) compatible with loosening, and the general poor quality of the bone stock.

CT allows for highly accurate measurement of cup orientation despite the degree of patient pelvic tilt and rotation.16,17 Although acetabular anteversion may be roughly estimated on a lateral radiograph, this technique has poor reliability and lacks the high degree of precision required to assess component migration accurately. Lateral radiographs in particular are affected by variation in patient positioning and are too imprecise when an exact measurement is required.18 Anteversion may be measured with great accuracy on CT by drawing a line tangential to the opening of the acetabulum and then measuring it compared with the AP plane. Anatomic derivation of the AP plane is made by accurately drawing a true horizontal line, which may vary depending on patient positioning. A line drawn along the posterior aspect of the posterior columns serves as the basis from which a line in the AP plane is drawn perpendicular. The intersection made with the line drawn tangential to the acetabulum defines the degree of acetabular version.19

CT has the additional advantage of accurately assessing further parameters of acetabular geometry, specifically, the acetabular depth, and degree of anterior and posterior wall cover.20,21 These measurements are of particular use in preoperative planning for revision arthroplasty.22 The quality of screw fixation23 and the degree and quality of osseointegration of bone substitutes24 also can be assessed. The quality and degree of bone stock25 may be assessed on CT; dual-energy x-ray absorptiometry scanning26 is an alternative imaging modality. Finally, CT-guided obturator nerve block may be used for control of chronic, recalcitrant hip pain. It is an optional treatment modality especially for patients unsuitable for surgery.27,28

Several arthrographic techniques have been described in the diagnosis of prosthetic loosening. After successful needle placement into the prosthetic hip, these techniques rely on the principle of showing the presence of contrast material below the level of the intertrochanteric line interposed between the bone-cement interfaces. In its simplest form, standard fluoroscopic demonstration of contrast material may be used; however, digital subtraction techniques are superior.29,30 Contrast material insinuating between the bone-cement interfaces when diagnosing loosening may be more apparent after ambulation.31 High-pressure techniques have decreased the false-positive rate of this technique; however, a false negative result may occur when adhesions or fibrous tissue formations limit the spread of contrast material. A negative result still may be obtained despite the presence of loosening because of the inability to achieve adequate high pressures and distention in a patient with a lax pseudocapsule or communicating bursae. The sensitivity and specificity of the test may reach 100% with the addition of the less viscous radiotracer sulfur colloid.32–34 Overall, arthrography tends to have a lower accuracy for acetabular component loosening.35