Trocar position and size for LGCP

The operation begins with dissection along the greater curvature of the stomach. The easiest area where to start the dissection is usually at the distal body of the stomach. Dissection should be extended proximally towards the angle of Hiss, however stopping the dissection approximately 1–2 cm distally to the angle of Hiss (preserving the last 2–3 short gastric vessels) is recommended. There are several reasons for leaving the top of the fundus intact, in particular in order to preserve the angle of Hiss anatomical antireflux mechanism, as well as to preserve blood supply of the most proximal fundus area, which is especially susceptible to ischaemia. Stopping the dissection distally from the angle of Hiss helps as well to retain this part of the fundus in place, thus preventing possibility of “valve type,” intermittent gastroesophageal obstruction caused by invagination of a floppy fundus if entirely dissected.
In summary, at this stage of the operation two substantial differences from sleeve gastrectomy should be taken into consideration: 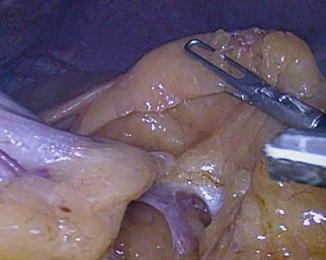 Dissection towards the angle of Hiss should stop approximately 1–2 cm distally to the angle of Hiss and the last 2–3 short gastric vessels are to be preserved. This is another obvious difference from sleeve gastrectomy.
Greater curvature dissection stops distally within 4–6 cm from the pylorus.

For sizing of the plication, an endoscope or 36 F calibration bougie should be kept in place during the operation. The greater curvature is imbricated, starting 1–2 cm distal to the angle of Hiss up to 4–6 cm of the pylorus. It is recommended to use nonabsorbable running suture, 2-0 or 1-0 size. Stitches should not be more than 1.5–2 cm apart. The stitches may be placed as full thickness, so no action or correction is to be taken in case the stitches are visible on endoscopy. Care must be taken not to cause gastric lumen obstruction, especially from a point of view that the greater curvature is infolded inside the gastric lumen, however not removed. Postoperative gastric wall oedema and venous congestion has to be taken into account as well. Therefore, even though the narrowed stomach may look at the end of the operation wider than after sleeve gastrectomy, the actual volume of the plicated stomach is close to the one after sleeve gastrectomy. Special attention should be paid to the two most common areas of potential obstruction – the GE junction and the incisura angularis. Especially, the distal stomach parts are more susceptible to obstruction. In general, the more distally the plication goes, the more care (more shallow bites) has to be taken to avoid an obstruction (Fig. 18.3). 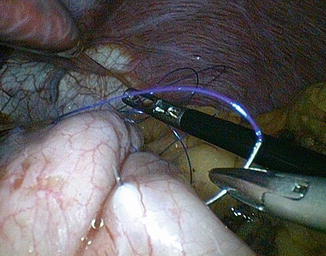 Correct suturing of the greater curvature

An additional second plication row (the outer layer) is applied “over” the first imbrication row to achieve appropriate gastric lumen, thus as close as possible to the 36 F calibration. By adding the second plication row, an increased (wider/deeper) gastric fold size is created. Stitches are positioned in the same way as when suturing the first row. Care must be taken, not to place the stitches/bites more than 2 cm apart to minimize the risk of underlying gastric wall/tissue herniation through the gaps between the stitches (bites). The procedure ends up with drying up of the operation field, and a leak test, if desired (see the section “Leak Test“). Trocars are removed sequentially under direct visualization at the end of the operation, and the incision sites are closed in institutional standard fashion (Fig. 18.4).

Laparoscopic view of plicated stomach
There are reports on using staplers (single stapler/clip firing), instead of the running sutures. The staplers are used in the same way as stitches, thus with a distance of maximum 2 cm between the individual clips. The proximal (1–2 cm below angle of Hiss) and distal (4–6 cm to pylorus) start and end up areas remain unchanged. From author‘s personal experience with a limited number of patients who underwent stapled LGCP, it seems that a less frequent postoperative nausea and/or vomiting is observed, as well as less noticeable postoperative oedema of the invaginated gastric tissue in short post-period is present. So far reported results of stapled LGCPs are encouraging; however, longer term results are awaited.

Methylene blue, or air insufflation via endoscope, may be used for a leak test at the end of the procedure; however, the leak test is not considered as mandatory. Thus, there is almost negligible risk of causing a leak intraoperatively provided the above-mentioned intraoperative technical precautions are respected. In fact, apart from a massive tissue destruction inflicted during the greater curvature suturing phase, which would be, however, obvious at the time when happened, there ’is no (other) risk of obscured, undetected immediate, intraoperative perforation.

During the LGCP similar intraoperative complications may occur as with any other gastrointestinal procedure. Immediate postoperative complications include (however are not limited to) nausea, vomiting and sialorrhea. Such complications can be ameliorated with pharmacotherapy, such as ondancetron. In the literature, there are reports on complications following LGCP, including gastric perforation and/or leak, peritonitis, obstruction and infection. Perforation and/or leak may occur due to stomach wall necrosis because of ischaemia induced by dissection of the greater curvature/fundus in the course of the operation, especially in the most susceptible, anterior fundus area. Ischaemia may also occur due to thermic injury to the stomach caused by dissection carried out too close to stomach wall. There are reports on gastric perforation caused by “cheese wire” cutting through effect of the suturing material being a result of compulsive, early postoperative overeating. However, most of these complications are not specific to LGCP, and may be considered among possible complications associated with any upper gastrointestinal restrictive operation.

Long-term complications include the risk of enlargement of the plicated stomach. Stomach dilatation may result from dietary noncompliance accompanied with repeated, massive overeating or suture line disruption, or a combination of both. Dilatation of plicated stomach appears to be very similar to those reported in a certain number of sleeve gastrectomies. Rarely, psychological intolerance of restriction is reported.