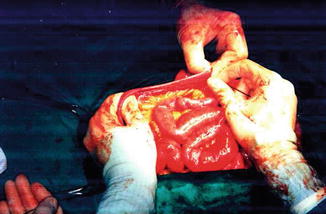 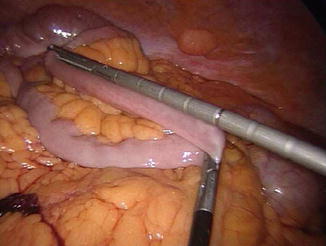 In summary, except for the unavoidable reduction of calcium and iron, due to the duodenal-jejunal bypass, and of liposoluble vitamins, consequent to the reduced fat absorption, assuming that simple sugars are fully absorbed by the small bowel in the alimentary stream, the absorption of all the other high-caloric nutrients in the standard BPD essentially depends on the volume of the gastric remnant (which, if too small, can cause a rapid gastric emptying and intestinal transit, thus reducing absorption capacity) and on the length of the intestinal limbs. The BPL should be long enough to allow complete digestion-absorption of pancreatic enzymes; the AL plus the CL should be long enough to guarantee, together with the colon, a protein absorption sufficient to counteract the endogenous nitrogen loss, as well as a sufficient water, electrolyte, and water-soluble vitamin absorption, still not allowing an excessive polysaccharide digestion-absorption; CL should be short enough to reduce as much as possible fat absorption, still allowing a bile salt absorption sufficient not to cause bile acid diarrhea. Incidentally, the loss of bile salt into the colon, together with the lack of gallbladder contraction, causes the constant presence of a lithogenic bile, which in turn would cause gallstone formation in the almost totality of operated patients, if a prophylactic cholecystectomy were not added to the operation in all cases.
It is very important to remember that the characteristics of very long term individual and interindividual weight maintenance, together with accurate studies of energy, fat, and protein intestinal absorption [4], and of postoperative changes of resting energy expenditure [2], lead to the hypothesis, subsequently verified by an overfeeding study [2], that a maximum daily intestinal absorption capacity exists for each standard BPD individual for fat and starch, while simple sugars are entirely absorbed, and protein absorption is a percent of the intake, corresponding to about 70 % [4]. In other words, the original intestinal lengths and gastric volume being equal, the interindividual variability of the weight of stabilization in BPD subjects is accounted for by interindividual differences of: (1) the original energy absorption capacity per unit of intestinal surface; (2) the entity of postoperative intestinal adaptation phenomena; (3) the intestinal transit time (which, in addition to gastric volume, can be influenced by the intake of fluids); (4) the simple sugar and protein intake; (5) the number of meals per day and the meal duration; (6) the body weight itself and the energy expenditure per unit of body mass. However, in each BPD individual the weight of stabilization cannot be modified by any increase or decrease of fat and starch intake, provided that the intake is greater than the maximum daily absorption capacity (also defined as “maximum transport threshold”).
Apart from the many overt modifications of the standard BPD, like preservation of the distal stomach [6] or of the entire stomach [7], or modifications of the intestinal limb lengths [8] (Figww. 20.4), and, more recently, the so-called duodenal switch [9, 10] (Fig. 20.5), which will be the object of another chapter of this book, once the BPD as a mechanism of action has been clearly described it is easy to recognize it in bariatric operations which have apparently nothing to do with BPD. The most obvious example is Roux-Y gastric bypass, where, even in its classic version with short BPL and AL [11–13] (Fig. 20.6), the meeting between food and biliopancreatic juices is delayed. In this operation it is generally assumed that the mechanism for calorie absorption reduction is ineffective, because the length of the CL is such that a complete calorie-rich aliment occurs. This is only partially true, as in many subjects with standard RYGB we have found a mild to moderate steatorrhea, in most cases confined to the first postoperative year. Anyway, it seems that the BPD mechanism is active, the threshold for intestinal fat absorption being exceeded, even if only minimally and temporarily, and that the initial weight reduction after RYGB is initially at least partially due to calorie malabsorption. The close similarity of RYGB to BPD is witnessed by the many surgeons who, with the very questionable aim of adding energy malabsorption to gastric restriction, use longer AL, or BPL, or both, thus originating operations called “distal GB” [14], or “long-limb GB” [15, 16], or even “very very long-limb GB” [17]. These operations, prompted by poor knowledge of the BPD mechanism, are very dangerous, because it was repeatedly demonstrated that to add malabsorption to gastric restriction is either just useless or even harmful for protein nutrition [14, 18]. 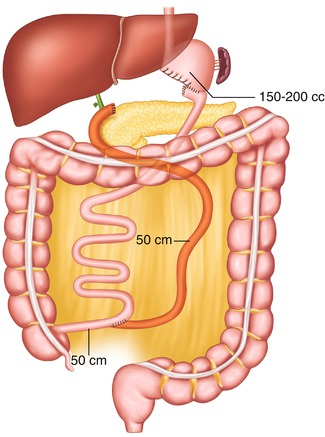 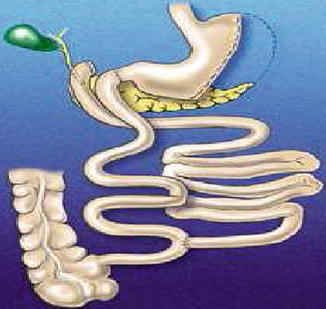 Miller’s divided gastric bypass, 1979
Another evident case of misunderstanding is the so-called mini-gastric bypass or MGB, which should be more correctly and meaningfully named “single anastomosis GB” or “loop GB.” Pioneered by Rutledge [19], MGB consists of a GB where the pouch is created much longer than usual (to prevent esophageal reflux), and the Roux-Y anastomosis is replaced by a loop one, placed in all cases 200 cm distal to the ligament of Treitz, with the aim of sparing one enteroenterostomy. The operation was severely criticized in the USA, but it is being increasingly performed in many non-American countries, where the authors generally report the same good weight loss result as in the standard RYGB, but with less complications and shorter hospital stay. Interestingly, with the exception of Sanchez-Pernaute [20], who replaced the classic gastric pouch with a sleeve gastrectomy in order to avoid also gastric bile reflux (Fig. 20.7), none of the surgeons who perform MGB (including the originator) seems to have realized that the operation is a BPD, already published as such by Scopinaro in 1980 [21] as one of the possible versions of the standard BPD (Fig. 20.8), where no AL exists, as the gastric remnant directly empties into the common limb, which, also exerting the functions of the AL, determines the existence, the quality, and the entity of malabsorption, and consequently is the one that should be measured. As almost no surgeon measures the small bowel in condition of full reproducibility, that is fully stretched, in case of short small bowel (e.g., around 400 cm, which is not a very infrequent case), the 200 cm that Rutledge and the vast majority of the other authors measure distal to the ligament of Treitz, thus totally ignoring what is left distal to the GEA, could very well leave them with a common limb, whose length is not known to the surgeon, short enough to cause severe energy and protein malnutrition. 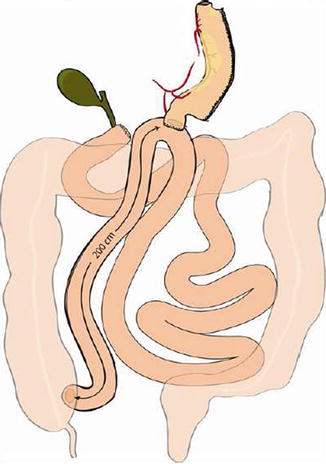 Scopinaro’s 1980 standard biliopancreatic diversion (bypass) with loop gastroenterostomy
An interesting example of unacknowledged BPD is the so-called endobarrier gastrointestinal liner [22], a short intraluminal sleeve anchored to the pylorus that delays the meeting of food with biliopancreatic juices, thus causing a certain degree of energy malabsorption and consequent weight loss. The device, 60–100 cm long, can be left in place only temporarily (generally 6 months), and it is used today to obtain a pre-surgical weight loss prior to bariatric surgery.
Evidently, the number of different types of BPD (laparoscopic or not) currently in use today is so huge that a description of each of them would be as impossible as useless. Therefore, we will only describe the technical aspects, the clinical management, and the outcome of the laparoscopic standard BPD (LSBPD) in our experience of little less than 300, and as reported by the few bariatric surgeons who used the same model of operation (laparoscopic or not).

The surgical technique [23] entails the use of five trocars, placed in the positions illustrated in Fig. 20.9. The patient is placed in a moderate anti-Trendelenburg position (20–25°). As a rule, we prefer to do first the cholecystectomy, which can be annoying due to the non standard trocar positions. The gastrocolic ligament is incised at about its midpoint and the dissection, which is carried out with a harmonic scalpel, is performed until the traction of the large curve allows for the mobilization of the gastric fundus, which implies that the avascular area is always sectioned. The first short vessel is rarely sectioned, exceptionally the second. The dissection of the lower greater curve and the sectioning of the right gastroepiploic and the right gastric vessels complete the isolation of the duodenum, which is divided with single application of endoGIA 60. The small curve is then isolated cranially with the ultrasound scissors, stopping 1 or 2 cm before the trunk of the left gastric artery (Fig. 20.10), and the gastric resection is carried out by repeated firing of endoGIA 60. To measure the gastric stump is very easy by filling with water (35 cm H2O) a condom which has been tied at the end of a nasogastric tube. Gastric volume should be measured until the surgeon becomes able to evaluate it by sight. Roughly, a gastric sectioning from the greater curve, moderately stretched, at approximately 15 cm from the cardias (Fig. 20.11) to the lesser curve at 5 cm from the cardias corresponds to a gastric volume of about 300 mL (Fig. 20.12). A distance of 20 cm along the greater curve corresponds to a volume of about 400 mL. This applies both to the laparoscopic and the open technique, as it was demonstrated by a check done in all cases of conversion (which, being due to problems with the GEA construction, was generally done after division of the stomach) at the beginning of our experience with the laparoscopic technique, when we started measuring again the gastric volume in order to reacquire the ability the gastric stump [23]. 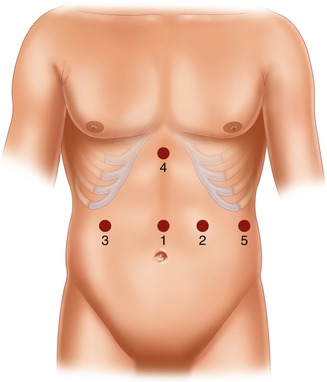 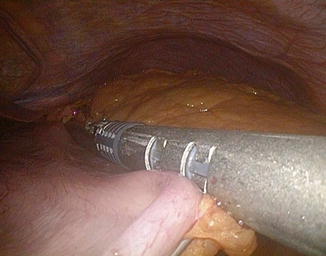 Gastric measurement along the greater curve 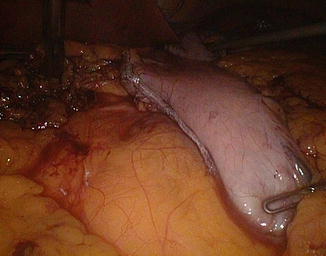 Gastric stump of approximately 300 mL
The patient is then placed in a slightly Trendelenburg position (about 10°). The small bowel is measured backward from the cecum, fully stretched (Fig. 20.3), using two forceps marked at 10 cm in alternating movements. A mark is left at 50 cm, the ileum is divided at 300 cm by using an endoGIA 45, and the mesentery is sectioned in depth with the ultrasonic scissors, taking care to proceed perpendicularly to its root (Fig. 20.13). The EEA is fashioned with a latero-lateral technique, with an endoGIA 45 through two small enterotomies made by the harmonic scalpel. The conjoined defect is closed with a manual running seromuscular suture. 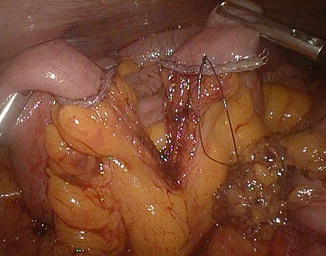 Ileal division
The left angle of the gastric stump is then identified, grasped, and pulled into the submesocolic space through an incision performed in the transverse mesocolon over the ligament of Treitz (Fig. 20.14). The distal intestinal stump is identified, checked for possible torsion, and perforated with the ultrasonic scissors at a distance from the suture line equal to the operative length of the endoGIA 45. The latter is used to perform a latero-lateral isoperistaltic GEA on the posterior wall of the stomach, as close as possible to the distal angle and at midway between the suture line and the greater curve (Fig. 20.15), with manual closure of the conjoined defect. After the leak test with methylene blue introduced through the nasogastric tube, the GEA is anchored by two stitches to the mesocolic rent, in order to avoid intestinal kinkings and internal hernias (Fig. 20.16). We always close the distal mesenteric defect and never the proximal one (Patterson). 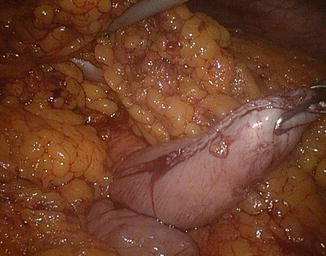 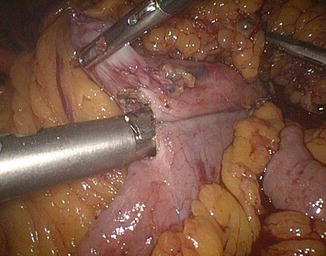 One single antibiotic shot is given preoperatively, when thromboembolic prophylaxis is started, that is continued for the entire first postoperative month. The patient is ambulating the day of operation. Analgesia consists of morphine and ketorolac by means of a continuous delivery system for 3 days, with paracetamol on demand. Metoclopramide is administered routinely together with intravenous fluids, that is, 3 days.
NG tube is removed on the first postoperative morning. GEA transit is checked on the 2nd day by X-ray oral contrast (leak diagnosis is based on clinical signs). Clear liquids are allowed on the 3rd day, when i.v. fluids are discontinued. Solid food is given within the first week, according to the gastric emptying as shown by X-ray check. Patients are discharged on 4th or 5th day (the vast majority of them live far from Genoa).
Patients are called for routine follow-up visits (with all the laboratory exams done) at 1, 4, 12, 24, and 36 months. Subsequently, they are not called anymore, but strongly recommended to continue coming yearly, or at least sending their complete lab exams by fax or e-mail.
Only gold members can continue reading. Log In or Register to continue