Illustration of the duodenal switch procedure: the operation consists of a sleeve gastrectomy, creation of an alimentary limb approximately of 150 cm and a common channel length of 100 cm

The DS is mainly used in super-obese patients (BMI >50 kg/m2) as it results in an excess weight loss (EWL) which is far better than what is reported for other bariatric procedures such as gastric banding (AGB) or gastric bypass (RYGB) [6–9].
A recent paper by Buchwald and Oien, which surveyed the International Federation for the Surgery of Obesity and Metabolic Disorders member nations with an 84 % response rate, revealed that the proportion of DS procedures in relation to all bariatric surgeries declined from 6.1 % in 2003 to 2.1 % in 2011 [10]. A study by Lazzati et al. [11], analyzing bariatric surgery trends in France from 2005 to 2011, showed a reduction in the proportion of this procedure from 1 to 0.7 %.
The reasons why the procedure with the greatest weight loss, evidence of lasting effect, and reversal of obesity-related comorbidities [7, 8] is the least performed worldwide are multiple and complex. Firstly, its technical complexity (especially using laparoscopy) plays a major role: it is time consuming and requires a skilled surgeon. Likely, the learning curve and operative volume may be important considerations, with a majority of DS being performed at tertiary specialty centers [12, 13]. Furthermore, DS is associated with an increased operative mortality and an increased risk of metabolic complications (protein energy malnutrition and other nutrient deficiencies) compared with the other bariatric procedures [14, 15].
The application of the laparoscopic technique to DS soon showed that laparoscopy is the ideal procedure for SG, the restrictive part of the DS. Thus, laparoscopic SG has been used to obtain substantial weight loss in high-risk patients, before proceeding with either DS or RYGB [16]. Given the excellent results obtained in the short term, it was argued that the SG might work as a stand-alone procedure [17]. SG rapidly gained enormous consensus among bariatric surgeons, because of its several advantages compared with laparoscopic RYGB and DS [18–21].
It has been demonstrated that in the hands of experienced surgeons and in high-volume bariatric centers, DS can be performed safely as a single-step procedure [2, 8, 22]. The theoretical advantages of performing DS with the staged approach (SG followed by DS) include the opportunity to detect patients who might achieve good results with SG alone, thus avoiding the morbidity linked to the malabsorption; the selection of patients for the second step who are compliant and attend the follow-up visits; simplification of the surgical technique and a reduction of postoperative morbidity [23].

21.2.1 The First Step: The Sleeve Gastrectomy

The patient is placed in the supine position with both arms appropriately padded and tucked to the sides. The SG is performed first with a six-port approach (Fig. 21.2). The greater curvature of the stomach is dissected free with the harmonic scalpel starting 6 cm proximal to the pylorus up to the angle of His. Care is taken to dissect the whole gastric fundus posteriorly, where the left pillar is carefully identified and dissected free over its anterior aspect. In all cases, the vertical gastrectomy is done over a 40 Fr intraluminal boogie with green or gold staple cartridges. The gastric antrum is systematically spared, and the last stapling is fired 1 cm lateral to the esophagogastric junction. Seamguard (Gore-Tex, Flagstaff, AZ) to buttress the staple lines is selectively used. 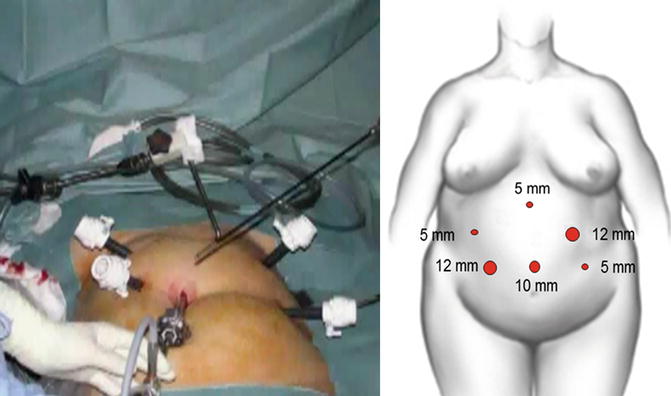 Positioning of the six ports

Patient’s position and port placements are the same as those of the SG (Fig. 21.2). The duodenum is divided using a linear stapler with a blue cartridge 4 cm distal to the pylorus at the level of the gastroduodenal artery (Fig. 21.3). The small bowel is measured with a 50-cm-long tape along the unstretched antimesenteric border. It is then divided with the linear stapler 250 cm from the ileocecal valve, and the distal end is anastomosed to the proximal duodenum with an intracorporeal hand-sewn continuous absorbable suture (Fig. 21.4). The proximal end of the divided bowel is anastomosed to the ileum 100 cm from the ileocecal valve to create a 100-cm common channel and a 150-cm alimentary limb. The mesenteric and Petersen spaces are closed with nonabsorbable running sutures. A leak test (air bubbles and blue dye) is performed at the end of the procedure.

A dissector is passed behind the duodenal bulb from top (black circle) to bottom (black line) at the level of the gastroduodenal artery, about 4 cm distal to the pylorus. A tape is then passed at this level to lift up the duodenum and guide the introduction of the linear stapler which is then used to divide the duodenum. CBD common bile duct, CHA common hepatic artery

(a) A duodenotomy is created on the posterior aspect of the duodenal bulb parallel and close to the staple line with monopolar electrocautery hook, then an enterotomy is created on the antimesenteric border of the jejunal loop. (b) The duodeno-jejunostomy is fashioned with an intracorporeal hand-sewn continuous absorbable suture

DS has proven to be successful in achieving and maintaining significant weight loss in the super-obese population. Table 21.1 shows the long-term results of the main series of DS published to date concerning EWL and diabetes resolution [7, 23–28]. In all these series, except for the one of Biertho et al. [25] the mean BMI is >50 and the EWL ranges between 66 and 76 %.


pts patients, BMI body mass index, EWL excess weight loss, O laparotomy, L laparoscopy
aMean
The systematic review and meta-analysis by Buchwald et al. [7] included 621 studies for a total of 135,246 patients and compared bariatric surgical procedures for weight loss and type 2 diabetes mellitus (T2DM) resolution. This review indicates that BPD/DS is the most effective operation with a EWL of 73 % at 2 years follow-up, followed by RYGB (63 %), vertical banded gastroplasty (56 %), and AGB (49 %).
The only randomized trial comparing DS and RYGB, considered by most as the gold standard for bariatric procedure, was conducted by Sovik et al. [14], who randomized 60 super-obese patients (BMI 50–60 kg/m2). One year after surgery percentage of excess BMI loss (EBL) was found to be 54.4 % following RYGB compared to 74.8 % following DS. Similarly, Prachand et al. [29] retrospectively analyzed 350 super-obese patients who underwent either DS or RYGB. Preoperative BMI was significantly greater in the DS group compared to the RYGB group (58.8 kg/m2 versus 56.4 kg/m2, P = 0.0014). Percentage of EWL at 36 months was significantly greater in the DS group compared to RYGB: 68.9 % versus 54.9 %. The systematic review and meta-analysis by Hedberg et al. [9] including 16 studies and 874 DS patients and 1,149 RYGB patients, showed the superiority of DS in terms of weight loss.
Biertho et al. [25] in a series of 810 morbidly obese patients with mean BMI of 44.2 ± 3.6 kg/m2 showed an EWL of 76 % that was maintained at 8.6 years follow-up concluded that DS was appropriate for non–super-obese patients. Concordantly, Anthone et al. [24] in a series including 701 DS patients with preoperative BMI ranging from 34 to 95 kg/m2 found a EWL of 66 % after 5 or more years of follow-up.

DS has a marked effect on obesity-related metabolic comorbidities, specifically T2DM (Table 21.1). In the main surgical series of DS, the reported rates of T2DM resolution vary between 86 and 100 % [5, 17–22].
The systematic review and meta-analysis by Buchwald et al. [7] showed that, at 2 years follow-up, diabetes remission was by far the greatest for patients undergoing BPD/DS (96 %), followed by RYGB (71 %), and least for pure restrictive procedures.
Recently Mingrone et al. [30] conducted a randomized controlled trial on 60 morbidly obese patients with a history of at least 5 years of T2D and a glycated hemoglobin level of 7.0 % or more. Patients were randomly assigned to receive conventional medical therapy (lifestyle modifications and hypoglycemic agents) or undergo either RYGB or BPD. At 2 years, T2D remission occurred in 75 % of patients undergoing the RYGB versus 95 % of those undergoing the BPD group (P < 0.001 for both comparisons). None of the patients in the medical-therapy group showed remission of T2D.
The same group [31] conducted a case-controlled trial with 10-year follow-up including 50 patients (28 medical therapy, 22 BPD), which showed resolution of T2DM in all BPD patients 12 months after surgery. The remission was definitive because none of the patients experienced diabetes again in the course of the study. Similarly, Tsoli et al.’s nonrandomized trial [32] including 24 patients (12 BPD, 12 SG) showed resolution of T2DM in all BPD patients 12 months after surgery.
In the systematic review and meta-analysis by Hedberg et al. [9], T2DM remission rate after DS was 88 %, compared with 76 % in RYGB patients (P = 0.18). The difference was not statistically significant because of the low number of patients (112 DS, 105 RYGB). Glycated hemoglobin levels were significantly lower after DS compared with RYGB.
Concordantly with T2DM results, hypertension showed marked improvement following BPD/DS (54–95 % resolution rate), as well as dyslipidemia (72–100 % resolution rate) [25, 31–40]. Obstructive sleep apnea was resolved in 90–100 % of patients [25, 27, 33, 36, 39].

Buchwald et al. [15], in his meta-analysis of 361 studies including 85,048 patients reported an overall mortality of 0.28 % within 30 days of bariatric surgery. BPD/DS had the highest early mortality with a rate of 0.29–1.23 % for open and 0–2.7 % for laparoscopic procedures.
The operative mortality for large DS series by laparotomy is approximately 1 % with a range of 0.6–1.4 % (Table 21.1) [24–27]. Laparoscopic approach seems to be associated with a lower mortality, ranging from 0 to 0.5 %, although laparoscopic series report a smaller number of patients. Postoperative mortality is most commonly associated with pulmonary embolus, respiratory failure, and anastomotic leaks. In the aforementioned series [23–28] the leak rate varied between 1 and 3.6 %.
Biertho et al. [41] analyzed a series of 1,000 BPD/DS patients, comparing the laparoscopic (228 cases) and open (772 cases) groups. In this series they reported only 1 postoperative death (0.1 %) due to pulmonary embolus in the laparoscopy group. Major complications occurred in 7 % of the patients, with no significant differences between the two groups (7 % vs 7.4 %, P = 0.1). No differences were found in the overall leak or intra-abdominal abscess rate (3.5 % vs 4 %, P = 0.1).
An important consideration is that BPD/DS is the procedure of choice for super-obese patients and it can be argued that surgical risk in this group is higher at baseline.
Flum et al. [42] in the Longitudinal Assessment of Bariatric Surgery, a prospective multicenter observational study, including 4,776 patients, analyzed 30-day outcomes after bariatric surgery and showed that extreme values of BMI were significantly associated with increased risk of major adverse outcomes (death; venous thromboembolism; percutaneous, endoscopic, or operative reintervention; and length of stay greater than 30 days). Similar conclusion were found by Kim et al. [43], who carried out a retrospective study of 54 super-super-obese patients (BMI >60) operated on for DS with a laparoscopic approach in 26 cases and open in 28 cases. Major morbidity occurred in 23 % of patients in the laparoscopic group and in 17 % of patients in the open group (P = 0.63). There were two deaths in the laparoscopic group (7.6 % mortality) and one death (3.5 % mortality) in the open group (P = 0.51).
However, other investigators showed that the DS can be safely performed in patients with a BMI > 50 kg/m2 as a single-stage procedure without significantly increasing the mortality [8]. Topart et al. showed that BMI becomes less predictive of complications once the learning curve for laparoscopic DS is overcome [22].
Iannelli et al. [23] conducted a case-control study in order to compare single-stage DS (110 patients) with a staged strategy (110 patients) consisting in a laparoscopic sleeve SG followed by laparoscopic DS in selected patients. The authors found a trend toward fewer postoperative complications in the staged strategy group that did not reach statistical significance on univariate analysis. However, single-stage DS was the only variable significantly associated with the risk of postoperative complications on multivariate analysis. Furthermore, six patients (5.5 %) in the single-stage DS group required conversion to open surgery and none did so in the staged group (P < .05) indicating that the staged approach simplifies the surgical procedure. The main advantage of the staged approach resides in the selection of patients who do not need the malabsorptive component of the complete DS procedure. In this series, 72.7 % of super-obese patients achieved 50.8 % EWL after SG at a mean follow-up of 3 years. These results are in accordance with those reported by Himpens et al. who recorded a 27 % rate of second-stage DS in a series of 41 morbidly obese patients undergoing SG at a follow-up of >6 years.