The dorsal hump is typically noticed from the lateral view but requires analysis from all views (Figure 15-1). In general, a desirable dorsal profile for a male patient should be a fairly straight line from the radix to the tip. In women, a slight depression (about 2 mm) below this line with a distal depression before the tip (“supratip break”) may be more appropriate. At its most superior aspect, the dorsum is made up of the paired nasal bones. More caudally, the dorsum is has a “T” shape composed of the midline septum and paired upper lateral cartilages. A dorsal hump may be due to excess nasal bone height, excess septal cartilage height, or most likely a combination of the two. 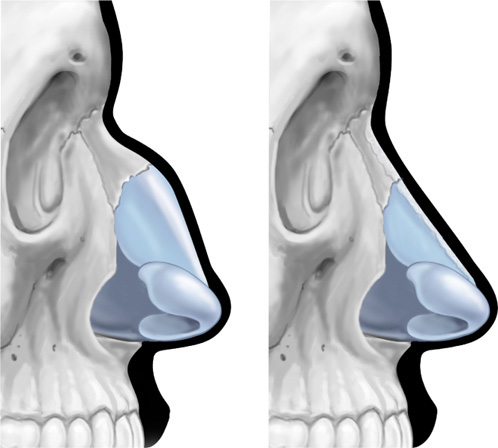 Patients with a “hump” or over-projecting dorsum are candidates for dorsal reduction. This may be performed as an isolated procedure or in conjunction with other maneuvers to reshape the nose.

It is important to assess the position of the radix pre-operatively. A nose with an apparent “dorsal hump” that is actually due to a low radix may be better managed with dorsal augmentation between the hump and the radix to raise the radix to a more ideal position. The uneducated observer will miss the low position of the radix and reduce the dorsal lump in an attempt to better define the nasal tip. Dorsal reduction in this setting would severely compromise nasal aesthetics and be contraindicated.

Some surgeons choose to mark the planned amount of reduction on the skin over the dorsum and refer to it as they incrementally reduce the bones and cartilages. The amount of reduction is based on the preoperative examination and 1:1 photographs. For patients undergoing an open approach, the incision across the columella may be marked preoperatively.

The dorsum may be approached via an open or closed technique depending on the surgeon’s preference. However, isolated reduction of the dorsum will likely not require an open approach. With a closed approach, the dorsum may be exposed via an intercartilaginous incision. If an open approach is chosen, the columellar incision is made and carried around each nostril into bilateral infracartilaginous incisions inside the alar rim.

Once above the medial crura of the lower lateral cartilages, the tissues in the midline above the dorsal septum and nasal bones are dissected with scissors. It is important to establish a dissection plane just above the periosteum and perichondrium as the dissection proceeds. This helps to keep a dry field, maximizes soft issue over the dorsum to hide small irregularities, and minimizes tissue between the dissection and the dorsum. Inferiorly, the dorsal septum is identified and is mobile below its attachments to the upper lateral cartilage.

A small amount of lateral dissection is important to feather or contour the dorsum and prevent a flattened appearance. However, too aggressive lateral dissection should be avoided if nasal bone osteotomies are to be performed. Some soft tissue attachment should be left on the bones to hold them in place following infracture. A freely dissected nasal bone risks malposition after fracture. If dorsal resection is excessive, placement of spreader grafts (either free or folded from the medial edges of the upper lateral cartilages) should be considered.

The method for bony reduction depends on the amount of bone that will be removed (Figure 15-2). For smaller reductions, the bony dorsum may be taken down with rasps (Figure 15-3). A guarded osteotome is used when a larger amount of bone is to be removed (Figure 15-4). Care should be taken that the osteotome passes relatively superficially and does not create a divot in the radix. After the osteotome is used, rasps are used to smooth the dorsal contour. In addition to reducing and smoothing the central dorsum, the rasps should be oriented obliquely along the lateral edges to refine the dorsal aesthetic lines. 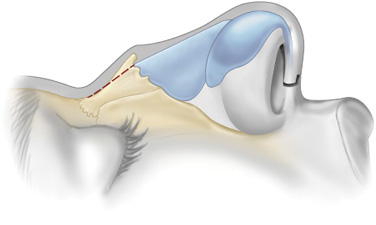 Figure 15-3. Reduction of the bony dorsum with a rasp. Note that the cartilaginous dorsum has already been reduced. 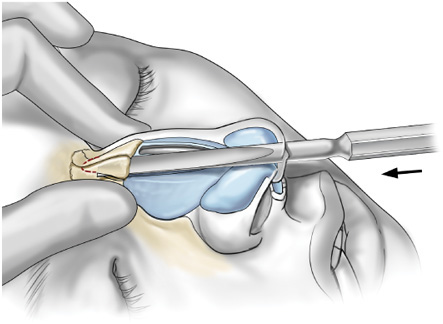 Figure 15-4. Reduction of the bony dorsum with an osteotome.

As the dorsum is incrementally resected, the skin should be frequently re-draped to confirm the adequacy of the reduction. A single suture may be used to temporarily close the columellar incision to accurately redrape the soft tissue envelope. A moistened finger is an excellent means of detecting subtle irregularities that may not be seen in the face of edema. Intraoperatively, the tip should project above the height of the dorsum to give a subtle supratip break. In thicker-skinned patients, this distance should be slightly greater. Once reduced, the dorsum should be inspected and palpated to identify the presence of an open roof. If present, osteotomy of the nasal bones must be performed to close the roof and re-create the pyramidal shape, which is addressed below.

Once the bony dorsum has been addressed, a needle tip Bovie on a low setting or scalpel blade can be used to score the more inferior dorsal surface to identify a subperichondrial plane over the septum (Figure 15-5