Preoccupation with one or more perceived defects or flaws in physical appearance that are not observable or appear slight to others.
B.

At some point during the course of the disorder, the individual has performed repetitive behaviors (e.g., mirror checking, excessive grooming, skin picking, reassurance seeking) or mental acts (e.g., comparing his or her appearance with that of others) in response to the appearance concerns.
C.

The preoccupation causes clinically significant distress or impairment in social, occupational, or other important areas of functioning.
D.

The appearance preoccupation is not better explained by concerns with body fat or weight in an individual whose symptoms meet diagnostic criteria for an eating disorder.
In addition to the above diagnostic criteria, specifications are included to help diagnosing the disorder. First, it is to be specified if the person has muscle dysmorphia, which is a preoccupation that one’s body build is too small or insufficiently muscular [6]. This disorder occurs almost exclusively in males with normal or even muscular-appearing bodies [7]. The majority diet, exercise, lift weights, and some use anabolic steroids and take food supplements. Second, the degree of insight regarding the beliefs is to be specified. Insight ranges from good or fair (individual is able to recognize that BDD beliefs are definitely, probably, or may or may not be true), to poor (individual thinks that BDD beliefs are probably true), to absent insight with delusional beliefs (person is completely convinced that BDD beliefs are true) [6].

As indicated by the diagnostic criteria, the first criterion of BDD involves the belief by an individual that she/he has one or more perceived flaw in physical appearance that appears unattractive, deformed, or in some other way abnormal. The flaws or deficits that brought attention to an afflicted individual are either not apparent or very slight to others. Although any body area can be of concern, the preoccupations most often focus on the skin, hair, or nose [7]. The concerns within these categories range widely and include acne, wrinkles, paleness, size and shape of nose, and both hair thinning or excessive hair growth. Disliked body parts are present simultaneously and sometimes sequentially, emerging in three typical patterns. Some are concerned with just one body part, some with one body part and then add new parts with time, and some have changing areas of concern [8]. These thoughts are difficult to control and can be quite time-consuming, occurring on an average 3–8 h per day [7].
The second criterion involves the performance of repetitive behaviors (e.g., mirror checking and skin picking) or mental acts (e.g., comparing oneself to another). These behaviors are also time-consuming and difficult to control. Although these behaviors may momentarily give the individual a brief relief, they are overall unwanted and not pleasurable. The most common of these features is mirror gazing, with about 80 % pathologically gazing at their reflection [9]. Mirrors dichotomously represent fear and hope [8]. These patients are driven by the desire to know exactly how they look and hope that they may look different. In a survey on mirror use, BDD patients were found to report a mean duration of an extended mirror session for 73 min while control participants for 21 min [9]. Skin-picking behavior is also very common in BDD patients; in a series of 123 patients, 27 % reported the behavior [10]. These types of compulsive behaviors can sometimes become very destructive, worsening a mild condition with ensuing infection and scars. Other time-consuming and repetitive tasks include excessive grooming and camouflaging, which can involve extensive hair styling, ritualized makeup application, touching of perceived defects, frequent change of clothing, and use of hats. These behaviors are aimed at improving the perceived deficits. For example, those with muscle dysmorphia may excessively exercise or lift weights. Some will excessively tan in hopes of improving pale skin or alternatively masking other perceived defects like wrinkles, brown spots, or acne. In addition to repetitive behaviors, those with BDD may also seek reassurance from others. They desire reassurance that they look okay, try to convince others of the reality of the ugliness, and request advice on how to improve the deficit [8]. Given that some patients with BDD will also excessively diet and exercise, BDD must be differentiated from eating disorders, such as anorexia nervosa and bulimia nervosa (Criterion D). In general, those with BDD will more likely be of normal weight and also have other body concerns.
These preoccupations along with repetitive acts are time-consuming and intrusive to these patients, which lead us to Criterion C. For a diagnosis of BDD, the preoccupations must cause clinically significant distress or impairment in social, occupational, or other important areas of functioning [6]. Impairment can range, but, on average, psychosocial functioning and quality of life are quite poor [7, 11]. Impairment can include missing school or work, avoidance of relationships and intimacy, and even becoming housebound or psychiatrically hospitalized [11, 12]. Increased severity of symptoms is associated with both poorer functioning in all realms of life and poorer quality of life [7].
Insight into beliefs can range from good to absent. Those with absent insight are delusional and are completely convinced that their appearance view is accurate. Delusions can also take the form of believing that others are taking special notice and mocking them because of the defects [11]. In those with BDD, insight is usually poor, with at least one third or more having delusional beliefs [13]. Those with delusional beliefs tend to be more resistant to therapy and often have greater morbidity.
Body dysmorphic by proxy refers to a form of BDD in which persons are preoccupied with defects that they perceive in another person’s appearance [6]. For example, a wife may think her husband is balding. In some cases, the person of concern will also start to worry about his/her own appearance [8]. In one case, a pregnancy termination was requested by a patient who believed that her child would be born with dysmorphic features [14].

Body dysmorphic disorder can be confused with other diagnoses including eating disorders, obsessive-compulsive related disorders, major depressive disorder, anxiety disorders, and psychotic disorders. Importantly, normal appearance is in the differential diagnosis.
Those with normal appearance concerns and/or clearly noticeable physical defects do not have BDD [6]. These people do not display the typical repetitive behaviors and have unimpaired functioning in society. Of note, skin picking can cause obvious physical defects [12]. BDD should be diagnosed if BDD-related skin picking is causing the perceptible appearance changes.
Eating disorders, such as anorexia nervosa and bulimia nervosa, cause individuals to have concerns about being overweight. Weight concerns may occur in BDD as well; however, BDD dissatisfaction often involves a broader extent of body areas, while those with eating disorders focus on weight and shape [13, 15, 16]. Eating disorders overall have a much higher female to male ratio than BDD. In addition, those with anorexia nervosa may feel more satisfied with weight loss, while people with BDD nearly always feel distressed [8]. Those with BDD will more likely be of normal weight and also have other body and appearance concerns. Those with BDD appear to have more negative self-evaluation and poorer functioning and quality of life [16, 17].
Anxiety, especially social anxiety, is also common in BDD patients. Social anxiety disorder is characterized by an excessive fear of social situations and embarrassment, avoidance, and introversion, many of these features which are shared with BDD [18–20]. In those with BDD, the anxiety is clearly due to appearance concerns and the belief that they will be ridiculed or rejected because of this. Social anxiety disorder tends to occur at a relatively earlier age of onset. Kelly et al. [21] reported that BDD patients are more likely to have obsessive–compulsive disorders, eating disorders, and psychotic disorders compared to patients with social anxiety disorder.
Patients with obsessive–compulsive-related disorders have symptoms that are not primarily focused on appearance and typically have more insight into their disorder than those with BDD [13], with 2 % having delusional beliefs compared with 27–60 % respectively [22–25]. Trichotillomania is a hair-pulling condition that is also an obsessive–compulsive-related disorder; however, if the hair removal is intended to improve appearance, than BDD is diagnosed. Depressive symptoms are quite common in those with BDD; however, BDD should be diagnosed if the criteria are met as outlined above [6]. Those with BDD often have delusional beliefs in that they are completely convinced that their ideas are correct. However, they typically do not display other symptoms of psychotic disorders such as auditory and visual hallucinations, disorganized thought, and other perceptual abnormalities. In addition, the delusions in individuals with BDD center on their body image. According to DSM-V, BDD should not be diagnosed if the preoccupation focuses on the belief that one emits a foul or offensive body odor. This is considered to be olfactory reference syndrome, which, to date, is not a DSM-V disorder [6]. 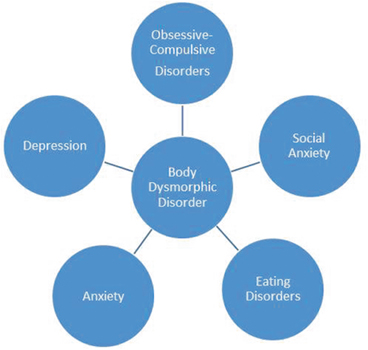 Body dysmorphic disorder and common comorbidities
The most common comorbid disorder is major depressive disorder, with lifetime comorbidity at 75–76 % [13, 15, 28]. A high proportion of BDD sufferers have comorbid lifetime OCD, approximately 32–33 % [13, 15, 28]. Patients with BDD and OCD have shared genetic, environmental, and phenotypic variables [29]. Both disorders are characterized by recurrent, time-consuming thoughts and ritualized behaviors [13]. Shared similarities include high levels of perfectionism and preferences for symmetry, repetitive checking behaviors, and avoidance of triggering situations [30]. Both have similar male to female ratios and average age of onset. Data also suggest close association between the two disorders on the basis of their response to pharmacologic treatments and is also supported by comorbidity and family studies [31].
Only gold members can continue reading. Log In or Register to continue