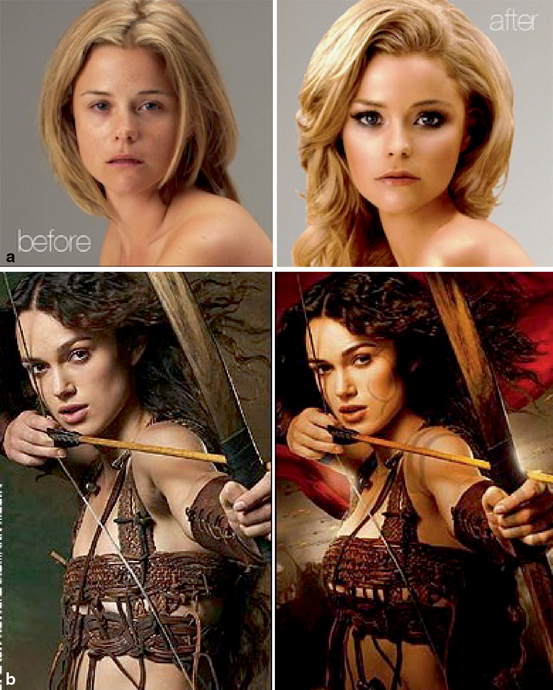 In the Greek myth of Narcissus, a very handsome hunter looks into the water and falls in love with his own reflection. He dies there alone, unable to look away from his own beauty. This was man’s first mirror; the still water of a clear pool [11]. In Mesopotamia around 3500 BC came about the Bronze Age when polished metal became the preferred material for mirrors [11]. As soon as technology improved, silver was exchanged for bronze, with its more neutral color allowing for better reflection [11]. In today’s age, we only have to turn a corner to see our own reflection in a smooth and unvarnished glass mirror. Seeing one’s own reflection has spurred the desire to change, manipulate, conceal, and enhance our given looks; with American men and women spending billions of dollars every year on beauty enhancing measures.
The history of cosmetics spans almost every society on earth over a period of at least 6000 years of human life. The word cosmetics stems from the Greek Kosmetikos, meaning “skilled in decorating” [11]. Palettes for grinding and mixing face powder and eye paint, dating to 6000 BC, have been unearthed by archeologists, and by 4000 BC in ancient Egypt, the art of makeup application was widely practiced [11]. Eye makeup (Fig. 1.3) was an early development, with green being the preferred color. It was made from powdered malachite, a green copper ore, and applied to the upper and lower eyelids [11]. Kohl, a black paste, composed of powdered alimony, burnt almonds, black copper oxide, and brown clay ocher was added to make the eyeliner darker, and furthermore, ground beetle shells were added to produce glitter [12]. Another early development was skin creams, with the Romans using beeswax, olive oil, and rosewater to create a proper product [13]. Rouge and facial powder were also favorite types of makeup throughout history. Greek courtesans amplified rouge’s redness by, first, coating their skin with white powder; these whitening powders contained large amounts of lead that would eventually result in premature deaths over the next 2000 years [11]. Queen Elizabeth I of England is well-known for her use of lead, creating a look known as the “Mask of Youth,” wanting to be known as the “Virgin Queen.” Arsenic complexion wafers were consumed in the eighteenth century in Europe, producing a white pallor through a state of induced anemia, again a poisonous way to whiten the skin [11]. 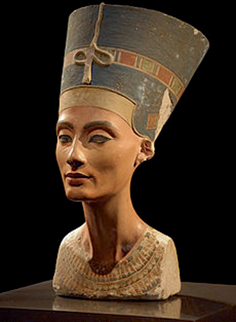 Queen Nefertiti (1370–1330 BC) of ancient Egypt with thick black eye makeup. Photograph courtesy of “Nofretete Neues Museum” by Philip Pikart—Own work. Licensed under CC BY-SA 3.0 via wikimedia commons. (​commons.​wikimedia.​org/​wiki/​File:​Nofretete_​Neues_​Museum.​jpg#mediaviewer/​File:​Nofretete_​Neues_​Museum.​jpg)
Studies, that are more recent, have shown that visible skin color distribution plays an important role in the perception of female attractiveness [14, 15]. Human beings are thought to have a preference for skin that conveys youth and health [16]. Recent research has demonstrated that males and females are sensitive to skin color variations, and such variations can affect the perception of attractiveness, age, and health; thus, promoting the design of makeup and cosmetic products able to provide more even skin color.
One of the earliest forms of cosmetics was actually beauty patches (Fig. 1.4), initially used to cover facial blemishes caused by smallpox scars in the 1600s [12]. These consisted of black silk or velvet pieces in shapes of hearts, stars, and/or moons to cover different parts of the face [12]. Patch boxes, considered the forerunner of the mirrored facial compact, were carried to hold replacements in case a patch were to fall off [11]. From these beauty patches came the advent of a theatrical product known as French White, which consisted of a dissolved white powder that was dried to produce a thin film to cover scars [17]. With the development of vaccinations, these facial ornaments moved from practicality to “cosmetic affection” [11], and soon we had the birth of modern day cosmetics. 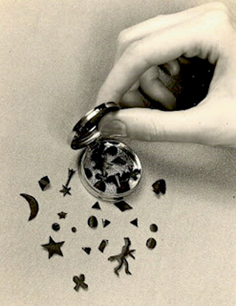 Silk beauty patches in different shapes. (​fortieswardrobe.​blogspot.​com/​2012/​10/​beauty-patches-anno-1948.​html)
Spearheaded by the French, the birth of the modern cosmetics industry came in the 1880s with the replacement of homemade cosmetics by store-bought, brand-name products: Guerlain, Chanel, Coty, Dior, Rubinstein, Arden, Revlon, Lauder, and Avon, to name a few [11]. Avon, an American company, first started in 1886 when a door-to-door salesman realized that there was more interest in the free introductory gift (a home-made perfume vial) than the books he was trying to sell [11]. He quickly abandoned books, and in 2014, Avon was again named as a top global beauty brand, ranking #2 in Brand Finance’s “Top 50 Cosmetic Brands,” second only to L’Oréal [18]. Today, cosmetics represent a vast category of innovative and complex formulations intended to cover, camouflage, and beautify. While cosmetics do not adhere to strict monographs governing their formulations nor do they go through the Food and Drug Administration (FDA) approval process, there are regulations for the allowed preservative constituents and coloring agents, given the history of use of products tainted with caustic substances including mercury, lead, and arsenic [12]. With the Food, Drug, and Cosmetic Act of 1938 and the tremendous resources spent by large cosmetic manufacturers in searching, formulating, and designing products to maintain product safety and purity; today, cosmetics are safe [12];and we as consumers purchase these products, spending billions of dollars each year in attempts to enhance our beauty.

So what does this magnificent word beauty truly mean, and what are the implications for being beautiful? The Merriam-Webster dictionary defines beauty as “the quality or aggregate of qualities in a person or thing that gives pleasure to the senses or pleasurably exalts the mind or spirit” [19]. According to Wikipedia, a popular collaboratively edited free Internet encyclopedia, an “ideal beauty is an entity which is admired, or possesses features widely attributed to beauty in a particular culture, for perfection” [20]. Beauty has even been documented to transgress the physical, amounting to an experience, leading to emotional well-being and attraction [20]. Although there are personal preferences to beauty and standards that vary across cultures and time; within a society at any given point of time, there is substantial agreement to what constitutes human beauty [10]. As beauty is able to represent a standard of comparison, it can cause inequalities and dissatisfaction when not achieved. Our human fascination with beauty compounded with the inequalities it presents to society has caused multiple different disciplines to extensively study this topic. Economists, psychologists, sociologists, social psychologists, and anthropologists to name a few have spent years and made careers out of studying the concept of beauty and the ramifications it presents to society. To economists who study pulchronomics (the study of the economics of physical attractiveness), beauty is considered a scarce resource, with those deficient experiencing negative feelings and consequences [10].
Developed by researchers at the University of Michigan in 1971, the most widely used scale to study beauty uses a 5 to 1 rating scheme with special instructions on what rating choices mean [21].

Although individuals will always vary to some degree when rating others’ attractiveness, there is a remarkable tendency to generally agree within categories with complete disagreement (e.g., the rating of someone as either a 5 or 1) about looks being an extraordinarily rare event [10]. Even when accounting for different interactions and interviewers, there still remains the tendency to view interviewees’ looks in, although not identical, but quite similar ways [10]. With respect to ages, looks of younger people are overall generally rated more favorably than those of older people; however, photos taken of the same persons over time have been shown to get similar ratings, illustrating that a person’s looks relative to those of others does not change greatly over the lifetime [10].
The importance of beauty holds true at all ages and also worldwide. Not deemed cute enough to sing on national television during the 2008 Summer Olympics, a cuter girl was ordered to lip-synch during the opening ceremony of the Beijing Olympic Games (Fig. 1.5) [10, 22, 23]. In other countries, not only matrimonial but also help-wanted advertisements mention a requirement for good looks and a nice appearance [10, 24]. Interestingly, although there is a worldwide importance of beauty and rating concurrence, there are overall cultural nuances. Americans in general (and men more so than woman) appear more able to give a “1” or “homely” rating, at least in studies compared to Canadians and the Chinese [10]. Regardless, there is overall worldwide agreement on the ability to stratify those into disparate categories of strikingly handsome or homely with subsequent societal implications. 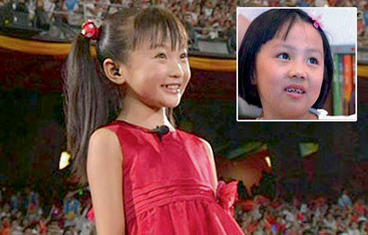 The “Beauty Premium” and “Ugliness Penalty” [25]