What structures develop from the hillocks of the first branchial arch?

The tragus, the helical crus, and helical root (lymphatic drainage to parotid nodes).

What structures develop from the three hillocks of the second branchial arch?

The helix, scapha, concha, antihelix, antitragus, and lobule (lymphatic drainage to posterior auricular nodes). The most common auricular sinus lies at the junction between the helical root and the superior helix (rises at the boundary between the first and second arch contributions).

What embryologic structure gives rise to the external auditory meatus?

The first branchial groove (lymphatic drainage to both parotid and posterior auricular nodes).

What is the normal size of the ear?

What is the normal position of the ear?

1. One ear length posterior to the lateral orbital rim.

What is the normal scalp-to-helix distance for each third of the ear? (Upper, middle, and lobule)

How is the concha subdivided?

The concha cavum and concha cymba, which are separated by the helical root (also referred to as the root of the helical crus).

The superior crus of the antihelix is bordered by what structures?

The scapha and the triangular fossa.

The inferior crus of the antihelix is bordered by what structures?

The triangular fossa and the concha cymba.

What is the triangular fossa?

The concave area between the superior crus and the inferior crus.

Describe the arterial blood supply to the ear.

Describe the venous drainage of the ear. 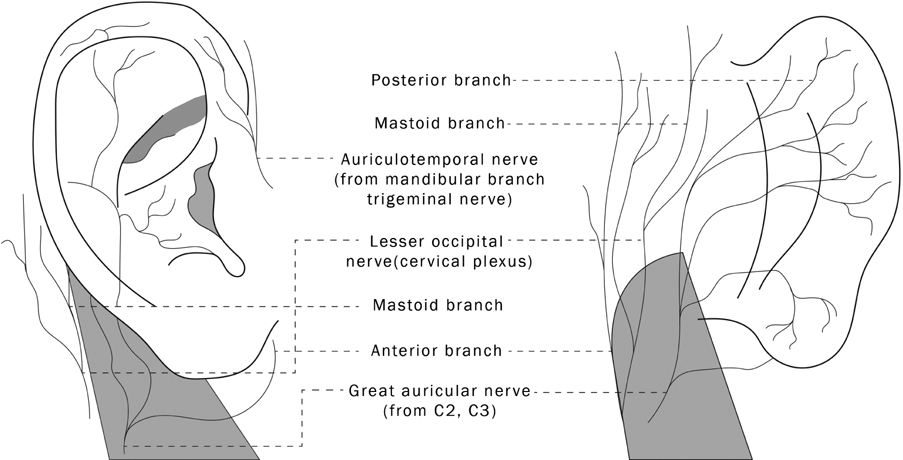 Sensory supply of the anterior surface of the ear is via the auriculotemporal (V3) and great auricular (CN II–III) nerves. The posterior surface is innervated by the great auricular nerve, and the mastoid branches of the lesser occipital nerve. The region of the meatus (and medial concha) is supplied by the nerve of Arnold from the Vagus nerve (oropharyngeal cancer may present with referred pain to the ear via vagal nerve fibers common to the oropharynx and concha). 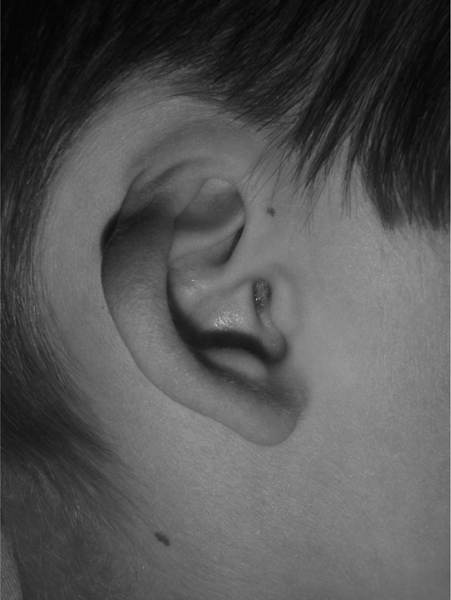 What is the proposed pathogenesis of microtia?

Obliteration of the stapedial artery. The bilateral deformity in Treacher Collins syndrome has been demonstrated to arise from a different event occurring early in gastrulation (Poswillo) and has also been associated with thalidomide.

For the microtia patient, at what age is it usually recommended for the child to undergo total ear reconstruction?