A 5-year-old girl presented with a small right hand, mild webbing of the fingers, and an ipsilateral chest wall deformity. She is a product of a full-term, spontaneous, vaginal delivery. There were no problems during the pregnancy or at the time of delivery. She is otherwise healthy and has obtained normal developmental milestones (e.g., sitting, walking, and talking) at the appropriate time. There is no family history of similar deformities, including three siblings.

The patient is a healthy-appearing female with normal appearance and stature. The right chest wall appeared sunken with absence of the sternocostal portion of the pectoralis major muscle. Shoulder, elbow, and wrist had full motion and strength. The right hand was slightly smaller than the left, with mild webbing of the second (index-long) and third (long-ring) web space (Fig. 78–1). She had full dexterity of her digits and was able to form a full fist and claw.

Radiographs of the chest and shoulder were normal. Several views of the hands revealed mild webbing of the second and third web spaces and shortened digits on the right hand, primarily at the middle phalangeal level (Fig. 78–2). 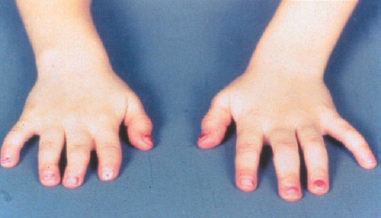 Figure 78–1  A 5-year-old child with small right hand and mild syndactyly of the second and third web spaces.