Pruritus occurring in pregnancy may be due to a flare of preexisting dermatosis or a pregnancy-specific dermatosis.

Pregnancy-specific dermatoses not associated with fetal risk are polymorphic eruption of pregnancy and prurigo gestationis.

An algorithm of an approach to a pregnant patient with a pruritus is shown in Fig. 15-2.

Figure 15-1. Striae distensae in a pregnant woman (36 weeks of gestation). 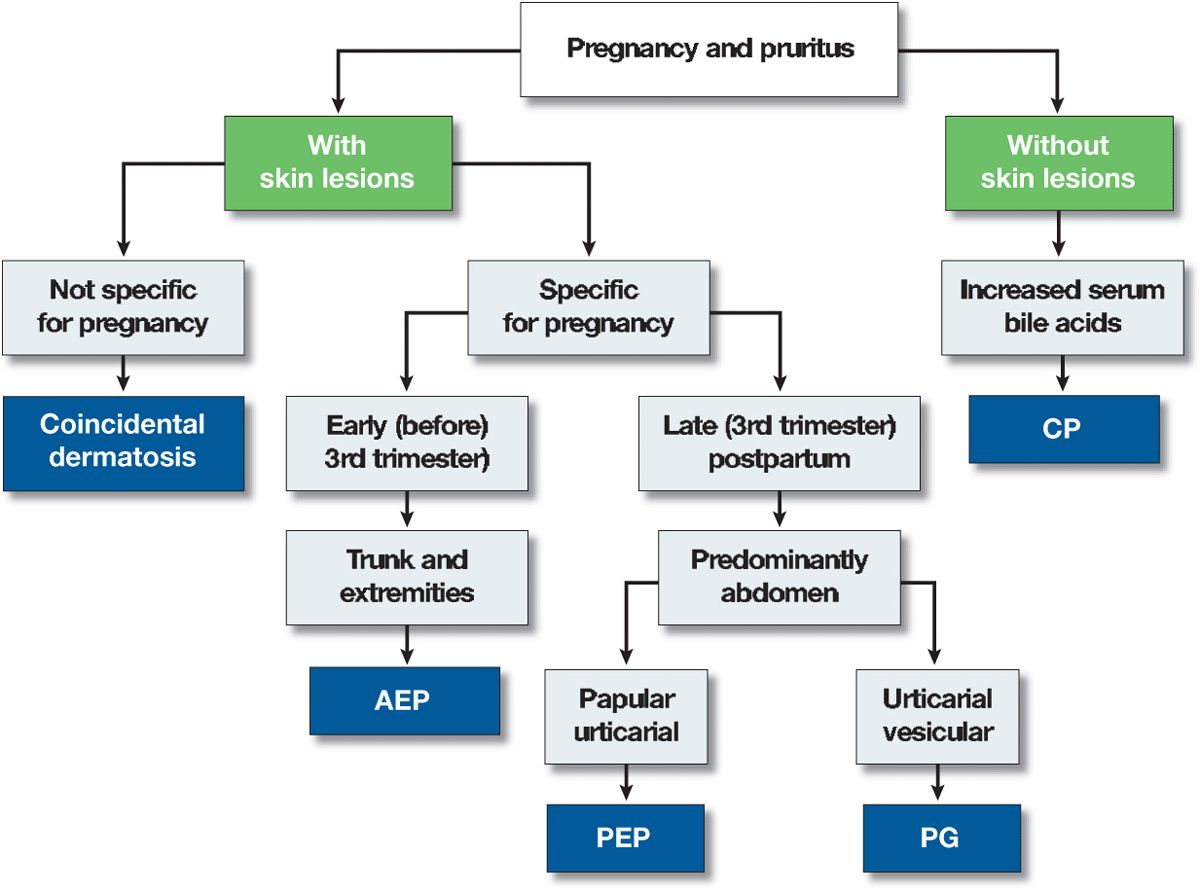 Occurs in the third trimester.

Leading symptoms: pruritus, either localized (palms) or generalized. Most severe during the night.

Pemphigoid gestationis is a pruritic polymorphic inflammatory dermatosis of pregnancy and the postpartum period. It is an autoimmune process with circulating complement-fixing IgG antibodies in the serum. The condition is described in Section 6.

PEP is a distinct pruritic eruption of pregnancy that usually begins in the third trimester, most often in primigravidae (76%). Common, estimated to be 1 in 120–240 pregnancies.

There is no increased risk of fetal morbidity or mortality.

The etiology and pathogenesis are not understood.

Average time of onset is 36 weeks of gestation, usually 1–2 weeks before delivery. However, symptoms and signs can start in the postpartum period.

Severe pruritus develops on the abdomen, often in the striae distensae. Skin lesions consist of erythematous papules, 1–3 mm, quickly coalescing into urticarial plaques (Fig. 15-3) with polycyclic shape and arrangement; blanched halos around the periphery of lesions. Target lesions. Tiny vesicles, 2 mm, but bullae are absent. Although pruritus is the chief symptom, excoriations are infrequent. Affected are the abdomen, buttocks, thighs (Fig. 15-3), upper inner arms, and lower back.

The face, breasts, palms, and soles are rarely involved. The periumbilical area is usually spared. There are no mucous membrane lesions.

The majority of women do not have a recurrence in the postpartum period, with subsequent pregnancies, or with the use of oral contraceptives. If a recurrence occurs, it is usually much milder.

Management: high-potency topical steroids that often can be tapered off, oral prednisone in doses of 10–40 mg/d relieves symptoms in 24 h. Oral antihistamines are ineffective.

Prurigo of pregnancy is now reclassified as part of the AEP spectrum.

AEP consists of flares of atopic dermatitis (also in patients who previously did not have AD); present either with eczematous or prurigo lesions (see Section 2).

The cardinal symptom is pruritus.

Clinically and histopathologically indistinguishable from pustular psoriasis of von Zumbusch

May have hypocalcemia and decreased vitamin D levels.

Obesity is widely recognized as an epidemic in the Western world.

Insulin: local reactions—lipodystrophy with decreased adipose tissue at the sites of subcutaneous injection; Arthus-like reaction with urticarial lesion at site of injection.

Large-vessel vasculopathy: Incidence greatly increased in diabetes. Ischemia is most often symptomatic on lower legs and feet with gangrene and ulceration. Predisposes to infections.

Synonym: Scleredema adultorum of Buschke. Need not be associated with diabetes. Onset correlates with duration of diabetes and with the presence of microangiopathy. Skin findings: poorly demarcated scleroderma-like induration of the skin and subcutaneous tissue of the upper back, neck, proximal extremities. Rapid onset and progression.

*Figures in parentheses indicate page numbers where these conditions are dealt with.

Large, intact bullae arise spontaneously on the lower legs, feet, dorsa of the hands, and fingers on noninflamed bases (Fig. 15-4).

Localization on dorsa of hand and fingers suggests porphyria cutanea tarda, but abnormalities of porphyrin metabolism are not found.

Neither trauma nor an immunologic mechanism has been implicated. Histologically, bullae show intra- or subepidermal clefting without acantholysis. 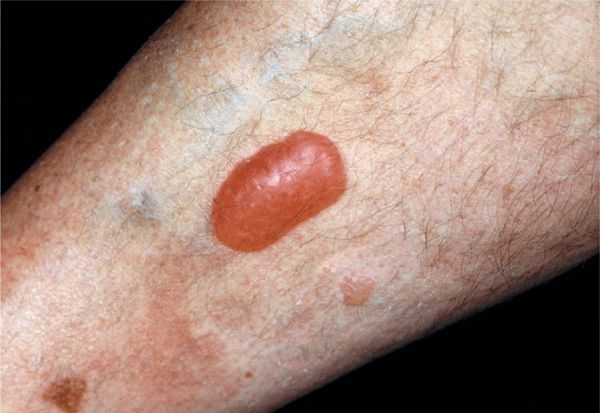 Figure 15-4. Diabetic bulla A large, intact bulla is seen on the pretibial skin on the right lower leg. The patient had many of the vascular complications of diabetes mellitus, i.e., renal failure, retinopathy, and atherosclerosis obliterans resulting in amputation of the left big toe.

Peripheral neuropathy is responsible for the “diabetic foot.”

Other factors are angiopathy, atherosclerosis, and infection and most often they are combined.

Autonomic neuropathy accompanies sensory neuropathy and leads to anhidrosis, which may not be confined to the distal extremities.

Sensory neuropathy predisposes to neurotropic ulcers over bony prominences of feet, usually on the great toe and sole (Fig. 15-5).

Ulcers are surrounded by a ring of callus and may extend to interlying joint and bone, leading to osteomyelitis.

Figure 15-5. Diabetic, neuropathic ulcer on the sole A large ulcer overlying the second left metacarpophalangeal joint. The patient, a 60-year-old male with diabetes mellitus of 25 years’ duration, has significant sensory neuropathy of the feet and lower legs as well as peripheral vascular disease, which resulted in the amputation of the fourth and fifth toes.

They arise in crops and gradually resolve, but new lesions appear and occasionally may ulcerate.

The pathogenic significance of diabetic dermopathy remains to be established, but it is often accompanied by microangiopathy.