The attributes of an attractive, youthful midface and periorbita include a narrow palpebral fissure, a short lower lid, and a convex midface with full cheeks. Aging causes descent of these structures with rounding of the palpebral fissure, lengthening of the lower lid, and loss of cheek prominence. Resuspension of the midface soft tissues (subperiosteal midface lift) can rejuvenate the midface and lower lid by restoring the youthful contours. Augmentation of the infraorbital rim with alloplastic implants can be a useful adjunct to midface soft tissue resuspension for patients who lack adequate skeletal projection in this area. It not only supplies attractive midface convexity, but also a platform on which to reposition the midface tissues (Fig. 33-1). 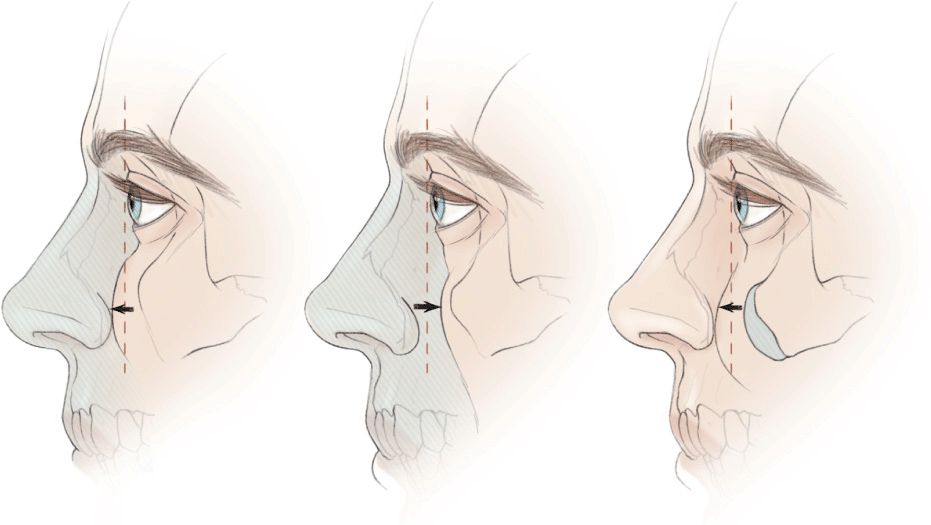 During the preoperative consultation, digital images of the patient are reviewed. Midface descent with loss of the cheek-lid interface is most obvious on lateral views. Smiling elevates the cheeks and provides a simulation of the proposed surgery.

Patients with “dry eyes” symptoms are informed that their symptoms may be aggravated immediately after surgery. Most often eye dryness is improved and even eliminated by the midface surgery, which elevates the lower lid margin, thereby providing more corneal coverage.

The patient is placed in the supine position, prepped, and draped in the usual sterile manner for head and neck surgery. A throat pack is placed.

The midface lift described here involves the subperiosteal degloving of the midface soft tissues, their vertical elevation, and suture fixation to drill holes in the infraorbital rim or an infraorbital rim implant. This procedure is performed through access afforded by periorbital, intraoral, and temporal approaches (Fig. 33-2).

Figure 33-2 Overview of subperiosteal midface lift utilizing alloplastic augmentation of the infraorbital rim. I prefer a transconjunctival retroseptal incision (broken line), often with the lateral extent of a lower lid blepharoplasty incision (solid line) to expose the infraorbital rim. This approach preserves the integrity of the lateral canthus and hence, the palpebral fissure. Transcutaneous blepharoplasty or transconjunctival with lateral canthotomy incisions are alternative approaches that provide greater exposure but are accompanied by a greater risk of palpebral fissure distortion. An intraoral incision (illustrated) is used to access the lower midface skeleton and to identify and protect the infraorbital nerve. The temporal area is accessed through a temporal incision (solid line